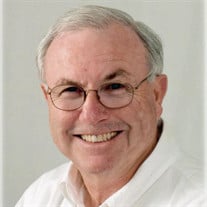 Albert Aloysius Demarest, Jr., age 81, beloved husband of Mary Deas Demarest, died peacefully on Wednesday, July 29, 2020 from complications of Parkinson’s Disease. Al was a native of New Orleans, LA, and attended St. Francis Xavier Elementary School in Metairie. He graduated from Jesuit High School and Loyola University, where he made lifelong friends. He was a proud member of Sigma Alpha Kappa fraternity and participated in ROTC, where he became part of the Pershing Rifles drill team. Following his college years, he served in the US Army and was honorably discharged in 1963. Three years later he met and married his wife Mary, and their adventure together began. Their early years involved moving to St. Louis, MO, Dallas, TX and Madison, CT, after which they returned to Metairie and eventually to River Ridge where they spent many years growing their family. A devout Catholic, Al served in a number of parishes in a wide range of committees and community service outreach. He also spent a year as President of the Parents Club at St. Mary’s Dominican High School. But his favorite volunteer positions were those that benefited Jesuit High School. He was part of a committee that helped his Class of ‘57 meet for a lunch that recurred once a month for over 40 years. He was also a devoted Class Leader in Jesuit’s annual phone-a-thon for the Living Endowment Fund and was honored by the school in 1995 for his loyal service. Al was a patient and loving father to his four children: Jennifer (Don) Jones, Katie (Josh) Cummings, both of Metairie; Albert, III (Elizabeth) Demarest, of Grapevine, TX, and Melissa (Christopher) Cormier of Lafayette, LA. He was also a doting grandfather to his grandchildren: Emily and Hunter Jones; Colin and Brody Cummings, Nathanael, Benjamin and Gisele Demarest, and Hayden, Molly and Lucas Cormier. Al was preceded in death by his parents, Albert, Sr. and Katherine Quealy Demarest; his brother and sister-in-law, J.Paul and Joan Demarest, his brother John David Demarest, sister-in-law Carter Demarest, his nephew Paul George Demarest, and his step-brother Jack Demarest. He is survived by his brother Kenneth (Angela) Demarest, sisters-in-law Peggy Demarest and Janice Demarest, and a host of cousins, nieces and nephews, as well as numerous friends that were like family. Al was known as a quiet man with a sharp and sudden wit, especially among those who knew him best. He was a loyal friend and was devoted to his faith. He was greatly loved by all who met him. A private service will be celebrated in Martin & Castille's La Fleur de Lis Chapel in Lafayette on Monday, August 3, 2020 at 11:00 A.M. Deacon Scotty Baudoin with Holy Cross Catholic Church in Lafayette, will conduct the services. Because of the current restrictions regarding the Coronavirus, visitation and attendance will be for immediate family only. Inurnment will take place at a later date. For friends and family unable to attend the service, you may watch the funeral service LIVE on Monday by clicking the link below and joining Mr. Demarest's Memorial Facebook group. The video will be available at service time. https://www.facebook.com/groups/AlDemarestJr The family would publicly like to thank the staff and administration of Garden View Assisted Living facility and especially the amazing staff of the River Oaks Retirement Manor, for their compassionate care of Al during the final stages of his illness. They would also like to most sincerely thank Hospice of Acadiana for their presence and tremendous support of the entire family during their most difficult moments. In lieu of flowers, we encourage donations to the following: Jesuit Living Endowment Fund, 4133 Banks Street, New Orleans, Louisiana, 70119, Hospice of Acadiana, 2600 Johnston Street, Suite 200, Lafayette, Louisiana, 70503, or to a charity of your choice. View the obituary and guestbook online at www.mourning.com Martin & Castille-SOUTHSIDE - 600 E. Farrel Road Lafayette, LA 70508, 337-984-2811

The family of Albert A. Demarest, Jr. created this Life Tributes page to make it easy to share your memories.