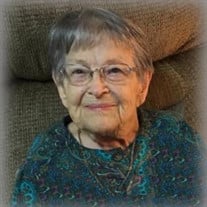 Funeral services will be held Monday, August 3rd at a 10:30 a.m. Mass of Christian Burial in St. Elizabeth Seton Catholic Church for Aline Margaret Arceneaux, who died peacefully on July 30, 2020, just 10 days after her 100th birthday. Interment will be in St. Peter Catholic Cemetery in Carencro. Reverend David Hebert, Pastor of St. Elizabeth Seton Catholic Church, will serve as Celebrant of the Mass and conduct funeral services. If you plan to attend the visitation, rosary, or funeral services of Ms. Aline, the family requests that ALL attendees wear masks or face coverings. The family requests that visiting hours be observed on Sunday, August 2nd from 4:00 p.m. until 8:00 p.m. A rosary will be prayed at 6:00 p.m. Visitation will continue Monday at Martin & Castille from 8:00 a.m. to 10:00 a.m. Arrangements are entrusted to Martin and Castille DOWNTOWN 330 St. Landry St., Lafayette, LA, 70506. For family and friends unable to attend the Funeral Mass, it will be LIVE-STREAMED on a Facebook group dedicated to Aline’s friends and family. To access and join the group, please click on the following link: https://m.facebook.com/groups/alinearceneaux (The video will appear at service time on Monday - 10:30 a.m.) A native and lifelong resident of Lafayette, Aline was the third of 13 children and a graduate of Carencro High School. She graduated with distinction from Southwestern Louisiana Institute (ULL) in 1941 in the College of Education with a major in Chemistry and a minor in Math. After college, Aline taught in Lafourche, Cameron and Acadia parishes, then decided to follow in her brother’s footsteps, enlisting in the U.S. Navy in 1943 during WWII. She served active duty in the WAVES within the Submarine Design Section, Bureau of Ships in Washington, D.C. After she was released to inactive duty, Aline taught at Rayne High School, then went to work in the film library at USL in 1948, the start of her 36-year tenure at USL. She worked as secretary to the Alumni Association, secretary to Joseph Riehl and finally secretary to Dr. Ray Authement in his offices as VP for Academic Affairs and President of the University. She retired from USL in 1985. Aline was also active in the Naval Reserve from 1951 until 1978, during which time she achieved the rank of Commander. She transferred to inactive reserve in 1978 and retired reserve in 1980. Aline was passionate about many things, giving of her time, talent and treasures. A devout Catholic, she loved God, her Church, her country and her family. She was proud of her heritage and took pleasure in the many clubs and organizations in which she was active. Among them were the Court Immaculata, Catholic Daughters of America, American Iris Society, Society for Louisiana Irises, Lafayette Garden Club, La. Society for Horticulture Research, Louisiana Garden Club Federation, Louisiana Project Wildflower, National Wildflower Research Center, Louisiana Native Plant Society, Lafayette Community Concert Association, American Legion and Galvez Chapter, Daughters of the American Revolution, and Military Officers Association of America. She was a Life Member of the Naval Reserve Association. Aline also served as Sacristan, Eucharist Minister, Minister to the Homebound, and Lector at St. Elizabeth Seton Church, and she served as a volunteer at Courtyard Retirement and Assisted Living, which later became her home. Aline was also an avid supporter of ULL Athletics, particularly enjoying the football and softball games, which she rarely missed. Aline was preceded in death by her parents, Edgar Arceneaux, Sr. and the former Edna Grevemberg; sisters, Lucille Arceneaux, Irma “Motsy” Gauthier, and Doris Begneaud; and brothers, Edgar Arceneaux, Jr., Donald Arceneaux, Richard Arceneaux, Sr., Patrick Arceneaux, Charles L. Arceneaux, Sr. and Robert Arceneaux, Sr. She is survived by her sisters, Edna “NaNa” Wheeler and her husband, Bernard; Suzanne Ambler; one brother, Francis Arceneaux and his wife, Lynette; and two sisters-in-law, Esther Arceneaux (Robert) and Barbara Arceneaux (Charles). She is also survived by 29 nieces and nephews who loved her dearly, and numerous great and great-great nieces and nephews. Pallbearers will be Charles “Chuck” Arceneaux, Robert “Robbie” Arceneaux, Jr., Donald Begneaud, Kenneth Begneaud, John Dupuis, IV and Gerald “Jay” Trahan. The family would like to thank the staff and aides at Courtyard Manor Nurse Care Center, and especially her roommate, Verla Tarver who lovingly watched over her, as well as Hospice of Acadiana. In lieu of flowers, memorials in Aline’s name may be sent to St. Elizabeth Seton Church, 610 Rain Tree Trail, Lafayette, LA 70507; to Hospice of Acadiana, 2600 Johnston St., Suite 200, Lafayette, LA 70503; or to the UL Lafayette Foundation, P.O. Box 43410, Lafayette, LA 70504-3657 for either the Thomas J. Arceneaux Welcome Center Endowment supporting the ULL Cade Farm or the Aline M. Arceneaux Endowed Fund supporting the Ira Nelson Horticulture Center. View the obituary and guestbook online at www.mourning.com Martin & Castille-DOWNTOWN-330 St. Landry St., Lafayette, LA 70506, 337-234-2311

The family of Aline Margaret Arceneaux created this Life Tributes page to make it easy to share your memories.