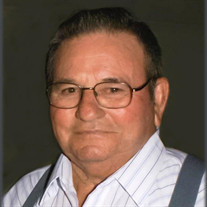 A Mass of Christian Burial will be held for Mr. Alvin Antoine Denais on Monday, January 10, 2022 at 11:00 AM at St. Alphonsus Catholic Church in Maurice. Alvin was 89 when he entered his heavenly home on Friday, January 7, 2022 as he passed away peacefully at his residence in Judice with his family by his side. The family requests that visitation be observed in Martin & Castille, 600 E. Farrel Rd., Lafayette, LA 70508, on Sunday, January 9, 2022 from 4:00 PM to 8:00 PM and will continue on Monday from 8:00 AM until the time of services. A Rosary will be prayed on Sunday, January 9, 2022 at 6:00 PM in Martin & Castille Funeral Home, 600 E. Farrel Rd., Lafayette, LA 70508. Entombment will be in St. Alphonsus Mausoleum in Maurice. Reverend Paul Bienvenu, Pastor of St. Alphonsus Catholic Church in Maurice, will conduct the funeral services. Alvin was born to Joseph and Eula Denais on May 29, 1932. He attended Judice High School and St. Alphonsus Catholic Church in Maurice, Louisiana. After Basic Training in El Paso, Texas, Alvin went on to proudly serve his country in the United States Army Charley Battery 233rd Field Artillery Battalion 44th Division, Fort Lewis Washington with a rank of Master Sergeant. Alvin was preceded in death by his parents Joseph and Eula Denais; his infant twins; his sister Verna Pellerin, his brother Averse Denais and his grandson, Tyler Denais, all of Judice. Alvin is survived by his loving wife, Marie Sabel Derouen, whom he married on October 4, 1952. He is also survived by his six children and their spouses; Daughters Debbie Romero of New Iberia (Blaine); Linda Denais of Maurice (Lee); and Sharan Denais of Judice (Allen); Sons Harlan Denais of Scott; Kenneth Denais of Maurice (Sandra); and Tim Denais of Maurice (Kim); one brother, Dale Denais of Judice; and one sister, Genevieve Domingue of Judice. Mr. Denais was also blessed with 8 grandchildren - Damian Denais, Taylor Suire, Brandon Denais, Kimberly Grogan, Kari Caldwell, Lilly Denais, and Ava Denais; and 8 great-grandchildren, Rylie Denais, Buddy Denais, Jaxon Denais, Jhett Denais, Kayla Broussard, Asher Grogan, Easton Caldwell, and Raelyn Caldwell. A native of Vermillion Parish and a resident of Judice for 80 years, he was a lifelong, prominent farmer who raised cattle, hogs, and crawfish and tended the land growing rice, soybeans, corn, wheat, oats, and milo. He was dedicated to the land that he owned and to the Parish where he contributed to the conservation and preservation of agricultural methods. Alvin was gifted with a servants heart and he participated in many organizations including, Woodmen of the World Lodge 714, Maurice Volunteer Fire Department, Duson Volunteer Fire Department, Judice Volunteer Fire Department, LA Farm Bureau Federation, and the Louisiana Cattlemen’s Association. He was a member of the Acadian Trail Riders and The Dirty Dozen Supper Club. Alvin was an avid steward of traditional Cajun cooking to include boucheries and attended numerous cooking events through the many years of his distinguished life. Alvin A. Denais will live on in the hearts and minds of his loving family and friends. Pallbearers will be Dale Denais, Tim Denais, Damian Denais, Brandon Denais, Blaine Romero and Lee Henry. Honorary Pallbearers will be Aaron Duhon, Percy Menard, Earl LeBlanc, Robert Denais, Danny Denais and Joe Denais. A heartfelt appreciation is extended by the Denais family to the nurses, staff and doctors of Hospice of Acadiana for their kindness, compassion and care given to Mr. Denais and his family during their time of need. Also a very special thanks to Donna Roy for her devotion to caring for Alvin. View the obituary and guestbook online at www.mourning.com Martin & Castille-SOUTHSIDE-600 E. Farrel Rd., Lafayette, LA 70508, 337-984-2811

A Mass of Christian Burial will be held for Mr. Alvin Antoine Denais on Monday, January 10, 2022 at 11:00 AM at St. Alphonsus Catholic Church in Maurice. Alvin was 89 when he entered his heavenly home on Friday, January 7, 2022 as he passed... View Obituary & Service Information

The family of Alvin Antoine Denais created this Life Tributes page to make it easy to share your memories.

A Mass of Christian Burial will be held for Mr. Alvin Antoine...

Send flowers to the Denais family.