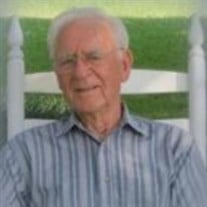 Funeral services will be held on Saturday, April 23, 2022, at 10:00 am in La Chapelle de Martin & Castille in Lafayette, for Alvin James Toups, Sr., 95, who passed away on Thursday, April 14, 2022, at Southwest Louisiana War Veterans Home in Jennings, Louisiana. Entombment will be in Calvary Cemetery Mausoleum. Deacon Art Bakeler of St. Genevieve Catholic Church in Lafayette will conduct the funeral services. Survivors include two sons, Michael Toups and his wife, Pam Toups, and Mark Toups and his wife, Tina Toups; twelve grandchildren; thirteen great grandchildren; four great-great grandchildren; and one sister, Sister Teresa Margaret Toups, O. Carm. He was preceded in death by his beloved wife, Rita Myrtle Leonard Toups; one son, Alvin Toups, Jr.; his parents, Ernest Toups and Simonia Toups; one grandchild, Justin Toups; two brothers, Ernest Toups, Jr., and Charles Toups; and one sister, Louella Toups. From March to July 1943 Alvin was employed by Lafayette Aeronautical School as an Airplane Mechanic. At the age of 16, he enlisted in the Navy during World War II and was assigned to the U.S.S. Curtis as part of the Pacific Theater. He proudly served his county until the end of the war in 1945. Alvin Spent most of his career with AT&T and retired in 1983 at the age of 57 as the Supervisor of the Assignment Area. He Married the love of his life, Myrtle, on November 8, 1947, until her passing on November 7, 2015. They are now reunited and dancing together in heaven. Alvin was an avid outdoorsman, and enjoyed hunting, fishing, and gardening. He Loved to travel throughout the United States, Canada, and Mexico. He leaves behind a legacy of five generations and many memories for those who loved him. He will be deeply missed. Pallbearers will be Eric Olson, Kirk Toups, Travis Toups, Kyle Toups, Michael Toups, and Mark Toups. The family requests that visitation be observed in Martin & Castille's DOWNTOWN location on Friday, April 22, from 5:30 pm to 8:00 pm and will continue on Saturday morning, April 23, from 9:00 am until time of services. A heartfelt appreciation is extended by the Toups family to the doctors, nurses and staff at the Southwest LA War Veterans Home. View the obituary and guestbook online at www.mourning.com Martin & Castille-DOWNTOWN-330 St. Landry St., Lafayette, LA 70506, 337-234-2311

Funeral services will be held on Saturday, April 23, 2022, at 10:00 am in La Chapelle de Martin & Castille in Lafayette, for Alvin James Toups, Sr., 95, who passed away on Thursday, April 14, 2022, at Southwest Louisiana War Veterans Home in... View Obituary & Service Information

The family of Alvin J. Toups, Sr. created this Life Tributes page to make it easy to share your memories.