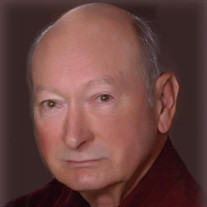 Funeral services will be held on Monday, December 6, 2021 at 11:00 AM in Martin & Castille's La Fleur de Lis Chapel in Lafayette for Ancil Donald Tuley, age 89, who passed away on Tuesday, November 30, 2021 at his residence in Broussard surrounded by his family. The Tuley family will receive guests at Martin & Castille's SOUTHSIDE location on Monday from 8:30 AM until the service time at 11:00 AM. Interment will be in Lafayette Memorial Park Cemetery. Pastor Derek Joyce of Covenant United Methodist Church in Lafayette will conduct the funeral services. Survivors include his wife of 71 years, Rhynah Apple Tuley; his daughter, Lana Tuley Michalk and her husband Robert; his grandchildren, Jessica Tuley, Charles Tuley and his wife Amy, Victoria Michalk Lucke and her husband Austin; his great-grandchildren, Kyle Holman, Hailey Tuley, Ryann Tuley, and Olivia Lucke; and his great-great-grandson, Dallas Holman. He was preceded in death by his parents, Charles Thomas Tuley and Ivy Pearl Cobb Tuley; his son, Guy Donald Tuley; his brother, Charles Guy Tuley; and his sisters, Opal Tuley Norris and Lorene Tuley Wright. Ancil was born on the 1st of July 1932 in Midlothian, Texas to Charles and Pearl Tuley. He graduated from Nocona High School in Nocona, Texas in 1950 and had a successful career in sales and management in the oilfield industry. He married Rhynah Apple on November 25th, 1950 and was a loving, devoted husband for 71 years. They then went on to have two children, three grandchildren, four great-grandchildren, and one great-great-grandchild. Ancil moved to Broussard, Louisiana in 1982 and was an active member of the Covenant United Methodist Church. In his spare time, he enjoyed cooking, golfing, fishing, watching football, and most importantly, being surrounded by his family. A man of deep faith and genuine caring, Ancil was a kind-hearted and hardworking man. His legacy will be his dedication to his family and his community. His charity was unmatched: opening his heart, home, and pocketbook to many people over the years. He will forever be missed, but never truly gone. Pallbearers will be Charles Tuley, Robert Michalk, Austin Lucke, Kyle Holman, Don King, and David Wiebe. Memorial contributions can be made in Ancil Tuley's name to Wounded Warrior Project (www.woundedwarriorproject.org ). A heartfelt appreciation is extended by the Tuley family to Dr. Gene Thomas Callais Jr. and his entire staff; his nurse Serena Bailey with NSI; and home health care, A Care Partner. View the obituary and guestbook online at www.mourning.com Martin & Castille-SOUTHSIDE-600 E. Farrel Rd., Lafayette, LA 70508, 337-984-2811

Funeral services will be held on Monday, December 6, 2021 at 11:00 AM in Martin & Castille's La Fleur de Lis Chapel in Lafayette for Ancil Donald Tuley, age 89, who passed away on Tuesday, November 30, 2021 at his residence in Broussard surrounded... View Obituary & Service Information

The family of Ancil Donald Tuley created this Life Tributes page to make it easy to share your memories.

Send flowers to the Tuley family.