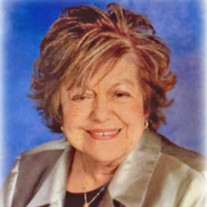 Funeral services will be held on Thursday, September 3rd at 10:00am at a Mass of Christian Burial at St. Mary Catholic Church for Ann Rinchuso Knight, 86, of Lafayette, who passed away peacefully at home on August 29, 2020. The family requests that visitation hours be observed on Wednesday, September 2, from 5:00 to 8:00pm at Martin and Castille Funeral home located at 330 St. Landry Street in Lafayette, and will continue on Thursday, September 3, from 8:00 to 9:30am. A Rosary will be prayed Wednesday evening at 6:30pm in the Funeral Home, led by Reverend Cedric Sonnier. Interment will be in Calvary Cemetery. Father Howard Blessing will be the celebrant of the Mass. Lectors will be Peyton Edward Sobiesk and Glenda Knight Lauter. Vocalists, Karen Broussard and Dave Domingue, Organist, Deborah Duhon, Violinist, Lauren Baker, and Trumpeter, Will Green, will perform, "Pie Jesu", "Psalm 23", "Ave Maria", "Panis Angelicus", and "Amazing Grace". Survivors include a daughter, Kelley Knight Sobiesk, and her husband, Paul, of Houston; two sons, Mark Knight and his wife, Patricia, of Lafayette, and Bryan Knight of Lafayette; her grandchildren, Britt, Regan and Peyton Sobiesk, Heather Billeaud, James Knight, Nicholas Knight, and Zachary Knight; three sisters; Frances Young, Virginia Smith, and Patricia Perkins; and sisters-in-law Glenda Knight Lauter and Rose Rinchuso; plus numerous nieces, nephews, and four great grandchildren. Ann was preceded in death by her beloved husband of 47 years, Edward “Eddy” Knight; her parents, Carrie and Joseph Rinchuso of Shreveport; one brother, Leon Rinchuso; and two sisters, Josephine Shropshire and Margaret Little. Ann was born in Shreveport, La. on January 6, 1934. After marrying Eddy in 1955, the family moved several times, finally settling in their adopted hometown of Lafayette in 1972. That same year, Eddy and Ann founded Knight Specialties, which later became Knight Oil Tools. Ann would ultimately serve as Chairman and CEO for several years following Eddy’s passing. Ann was involved in countless organizations and philanthropies throughout the years. Among these, she was a founding member of the Acadiana Conservatory of Music and The Krewe of Victoria. Other beloved organizations included Avec Souci, The Lafayette Symphony, Friends of Music for the University of Louisiana, Friends of The Humanities in Lafayette, Acadiana Center for the Arts, The Performing Arts Society, and The Lafayette Children’s Museum. For her service in Acadiana, she was honored with the Lafayette Civic Cup in 2008. Ann was devoted to her community and her family. She loved life and had many dear friends throughout the years, but none more special than the Destin Dollies. Wherever the Dollies went, a party was sure to happen. Ann’s Catholic faith was her guiding light along her journey. She was a devoted member of St. Mary Catholic Church, serving on the Parish Altar Society and serving as a member of the St. Mary Choir for over 30 years. In addition, she was actively involved in the Bishop’s Charity Ball, serving as Queen in 1999. She and Eddy were also members of The Equestrian Order of the Holy Sepulchre. The family would like to thank her wonderful caretakers who have been by her side for many years including Demetria Perro, Stacia Howard, Flo Rubin,Theresa Rubin, Peggy Chaisson, Aaleyah Chaisson, Dorothy Montgomery, Melissa Morrison, and TyDanaya Arceneaux, among others - you were her angels, and we thank you for your love and compassion. Memorial contributions in Mrs. Knight’s name can be made to The Carmelite Monastery or to any of organizations named above that she was devoted to. Pallbearers are James Edward Knight, Nicholas Patrick Knight, Glenn Morris Lauter, Britt Jacob Sobiesk, Paul Jacob Sobiesk, Peyton Edward Sobiesk. View the obituary and guestbook online at www.mourning.com Martin & Castille-DOWNTOWN-330 St. Landry St., Lafayette, LA 70506, 337-234-2311

Funeral services will be held on Thursday, September 3rd at 10:00am at a Mass of Christian Burial at St. Mary Catholic Church for Ann Rinchuso Knight, 86, of Lafayette, who passed away peacefully at home on August 29, 2020. The family requests... View Obituary & Service Information

The family of Ann R. Knight created this Life Tributes page to make it easy to share your memories.

Funeral services will be held on Thursday, September 3rd at 10:00am...

Send flowers to the Knight family.