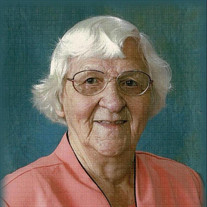 A Mass of Christian Burial will be held for Anna Maria “Marie” Spaetgens Broussard at 10:00 AM on Tuesday, December 28, 2021 at Cathedral of St. John The Evangelist in Lafayette. Marie was 101 when she passed away peacefully from this life on Friday, December 24, 2021, at her home in Lafayette. The Very Reverend Chester C. Arceneaux, VF, Rector of Cathedral of St. John the Evangelist, will be the Celebrant of the Mass. Burial will be held in St. Leo IV Catholic Cemetery in Roberts Cove, Louisiana. The family has requested that visitation be observed at Martin and Castille's Downtown location on Monday, December 27, 2021, from 2:00 PM to 8:00 PM. A Rosary will be recited on Monday, December 27, 2021 at 6:30 PM. Visitation will continue Tuesday, December 28, 2021, from 8:00 AM until time of services. Survivors include her five daughters, Faye Blankenship (James) of Lafayette, Betty Serrette (Johnny) of Cypress Island, Laura Gardner (Adrian) of Gilbert, SC, Elaine Thibodeaux (Dempsey) of Lafayette and Judy Dugas of Lafayette; ten grandchildren, Jodie Benton (Michael), Brian Blankenship (Kristin), Katherine Wise (Justin), Lindsey Chriceol (Phillip), Melissa Fontana (Vincent), Molly Russell, Nicholas Thibodeaux (Jaime), Amanda Benoit (Destin), Hayden Dugas (Kellie) and Hannah Dugas; twelve great-grandchildren, Lucy and Max Benton, Samuel Blankenship, Abigail and Hazel Wise, Kimberly Russell, Rinoa and Zelda Chriceol, Olivia, Elijah, Rosalie and Evelyn Fontana; one great-great granddaughter, Everleigh Gaspard; one sister-in-law, Ruby Spaetgens; and numerous nieces and nephews. Mrs. Broussard was preceded in death by her husband, Joseph M. Broussard; her parents, Hubert Leo and Josepha Elizabeth Gossen Spaetgens; her siblings, Henry Joseph, Sr. and his wife, Bertha Spaetgens, Johann Hubert Spaetgens, William Leo Spaetgens, Anthony Leonard and his wife, Joyce Spaetgens, Lawrence Anthony, Sr. and his wife, Carol Spaetgens, Charles Joseph and wife, Barbara Spaetgens, Mary Allie Agnes and husband, Calvin Caillier; and one niece Catherine S. Schexnider. Mrs. Broussard (Marie) was born in Roberts Cove, Louisiana on August 28, 1920, the last surviving child of Hubert Leo and Josepha Elizabeth Gossen Spaetgens. The Spaetgens family shared very close ties and a strong Catholic faith. She grew up in Roberts Cove and graduated from Crowley High School in 1939. She worked at Rayne Branch Hospital as a nurse’s aid for a short while before taking a clerical position at Rayne Wholesale Company. While working for Rayne Wholesale Company, Marie met her husband, Joseph M. Broussard, who was also employed there. Joseph, a French speaking native of Vermilion Parish (Kaplan), was warmly welcomed by the entire Spaetgens family. Marie and Joseph were married November 28, 1945, at St. Leo’s Catholic Church in Roberts Cove. They started out their married life in Kaplan but Joseph’s work took them to Rayne and Franklin for a while. They finally moved to Lafayette in 1948 where they raised their family of five daughters and where they lived out the rest of their married days. Marie and Joseph celebrated their 70th and last wedding anniversary with their family in 2015. Marie was a member of the Cathedral of St. John the Evangelist Parish for over 70 years. She was devoted to her Catholic religion, a woman of deep faith and prayer. She was very proud of her family and of her German heritage. Marie loved family gatherings, attending St. Leo’s Day and Germanfest Celebrations in Roberts Cove, and she especially enjoyed the trips to Indiana for reunions with her long-distance German relatives who lived there. She was fondly and affectionately known to her family as MawMaw, Aunt “Ree” and T’ante Marie. She was noted for her remarkable ability to remember birthdays, anniversaries, and other special dates not only of her immediate family but her extended family and in-laws as well, even into her later years. You could always rely on her to have a strong, steaming cup of dark roast Community Coffee to serve her guests. Upholding the honor of pallbearers will be Brian Blankenship, Nicholas Thibodeaux, Hayden Dugas, Samuel Blankenship, Johnny Serrette and Dempsey Thibodeaux. Honorary pallbearer will be Jimmy Murrell. In lieu of flowers donations may be made in Mrs. Anna Broussard’s name to LAMM Family Care Hospice, 210 West Mill Street, Crowley, LA. 70526. The family would like to express their sincere thanks to Father Chester Arceneaux, Deacon George Jourdan, LAMM Family Care Hospice staff and her faithful caretakers, Kristy Melancon and Yvonne Trahan for their assistance and prayers. We would also like to thank the many friends and relatives who visited Mom during her illness. View the obituary and guestbook online at www.mourning.com Martin & Castille-DOWNTOWN-330 St. Landry St., Lafayette, LA 70506, 337-234-2311

A Mass of Christian Burial will be held for Anna Maria &#8220;Marie&#8221; Spaetgens Broussard at 10:00 AM on Tuesday, December 28, 2021 at Cathedral of St. John The Evangelist in Lafayette. Marie was 101 when she passed away peacefully from... View Obituary & Service Information

The family of Anna Maria Spaetgens Broussard created this Life Tributes page to make it easy to share your memories.

A Mass of Christian Burial will be held for Anna Maria “Marie”...