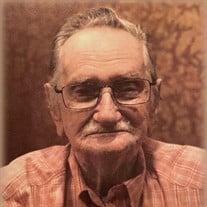 A Mass of Christian Burial will be held on Thursday, January 20, 2022 at 1:30 PM at Sts. Peter & Paul Catholic Church in Scott for Antoine Cleveland Arnould, 92, who passed away at Courtyard Manor Retirement Home in Lafayette on Monday, January 17, 2022. Entombment will be in Sts. Peter & Paul Mausoleum. Reverend Mario Romero, Pastor of Holy Cross Catholic Church, will serve as Celebrant of the Mass and conduct the funeral services. He was preceded in death by his parents, Camille Rene Arnould and the former Mable Roger; his brother, Earl Vital Arnould; one infant sister. Mr. Arnould honorably served his country in the United States Air Force during World War II and the Korean War. He was the Head Usher at noon Mass at Our Lady of Fatima Catholic Church for over 50 years. In his earlier years, he enjoyed going to the local skating rink to dance and skate. During his free time, he enjoyed spending time outdoors fishing. He was very intelligent and involved in early computer tech. He built a Sinclair computer from a kit which began his love of programming. As someone said of this kind man, “When Cleveland talks people listen.” His caretaker for 10 years, Mary Stutes, attests to the fact that he was a very patient man and never complained. He has 6 bypasses surgeries, stints, and a hip replacement. Being a good friend to Mary Stutes for a long time, her children loved him as a father; Christopher, Tobi, and Nicole Mattheiu. Christopher’s computer programming career is due to the hours they spent while working on Vic & Commadore 64 computers. God Bless his soul and may he rest in peace in Christ. The family requests that visitation be observed in Martin & Castille's SCOTT location on Thursday from 10:30 AM until time of services. A Rosary will be prayed by Deacon Cody Miller on Thursday at 11:30 AM in Martin & Castille Funeral Home. Memorial contributions can be made in Mr. Antoine Cleveland Arnould's name to Hospice of Acadiana, 2600 Johnston St. Lafayette, LA 70503. A heartfelt appreciation is extended by the Arnould family to Dr. Mickey, Dr. Jessica Petry and her associates, Dr. Olivier, Msgr. Sigur, Fr. Mario Romero, Fr. Mark Derise, Fr. Calais, and Fr. Andre Metrejean, his sitter Agnes Kilcrist, all personnel from Hospice of Acadiana, Courtyard Manor staff, especially his nurse Paige, for such professionalism and caring service. Family would also like to give thanks to the nurses and staff at Our Lady of Lourdes Regional Medical Center for their care. A special thanks to a loving and gracious lady, Juanita Boudreaux, who called every day to get news on him, prayed many prayers, and sent many containers of gumbo for Mr. Arnould. Jesus, Mary & Joseph please be with him on his way. Amen. Obituary was given by his longtime caregiver, Mary Stutes. View the obituary and guestbook online at www.mourning.com Martin & Castille-SCOTT-802 Alfred St., Scott, LA 70583, 337-234-2320

A Mass of Christian Burial will be held on Thursday, January 20, 2022 at 1:30 PM at Sts. Peter & Paul Catholic Church in Scott for Antoine Cleveland Arnould, 92, who passed away at Courtyard Manor Retirement Home in Lafayette on Monday, January... View Obituary & Service Information

The family of Antoine Cleveland Arnould created this Life Tributes page to make it easy to share your memories.

A Mass of Christian Burial will be held on Thursday, January...

Send flowers to the Arnould family.