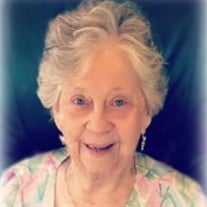 With the deepest felt sorrow, the children of Barbara Waddell Campbell, 90, announce her passing from this life on January 10, 2021. Born June 21, 1930 in Pensacola, FL she completed the family of Henry Beckett and Thelma Ernestine Waddell. Upon high school graduation from PHS in 1948, Barbara furthered her education at FSU becoming an elementary school teacher at Allie Ynestra Elementary in Pensacola with her first fourth grade class remaining with the same students through fifth and sixth grades. Known for her hilarious humor and quick-wit, Barbara was also known as a prankster. While attending FSU and serving as president of the South Cawthon Dorm, she was known for pulling the fire alarm at Jennie Murphree Dorm in the early morning hours before exams. She would also place a mannequin in the bed of her dorm mother as a joke. While attending FSU, Barbara met her future husband, George Norman Campbell from Pensacola who, coincidentally, also graduated from PHS in 1948. Through George's military career with USMC, Barbara's focus changed to raising their five children and keeping them grounded in the Lord by worshipping at South College Church of Christ. Throughout her life, Barbara mastered the art of knitting and crocheting, making numerous baby items, afghans and Christmas ornaments which the family still uses today. Barbara continued her career as a teacher when her youngest was in fourth grade, teaching at Parks Primary, Saint Cecilia, Judice Elementary, Broussard Elementary and Katherine Drexel, retiring from Lafayette Parish School System in 1995. Left to cherish her love and memory are her five children, Karen Gambino, Scott Campbell, Sandra Cormier (Lawrence), Carol Hickey (Mike) and Kimberly Bourgeois (John); ten grandchildren; and twelve great grandchildren. She was preceded in death by her beloved husband, parents and her sister, Mary Elizabeth Bradford. Barbara often stated, if she could, she would return as a dolphin; free and always smiling. So if you ever spot a dolphin swimming in the ocean, please think of Barbara and keep her memory alive. Funeral services will be held on Wednesday, January 13, 2021 at 11:00 AM in La Chapelle de Martin & Castille in Lafayette. Ken Carmouche, member of South College Church of Christ in Lafayette, will conduct the funeral services. Interment will be in Fountain Memorial Gardens Cemetery . For family members and friends who are unable to attend on Wednesday, January 13, 2021 at 11:00 AM, the service will be live-streamed to a Memorial Facebook Group dedicated to Barbara Campbell. To join the group, click the link below and then "join group". The video will appear on this group at 11:00 AM. You may also share memories, pictures and condolences to the family in this group. Facebook link: www.facebook.com/groups/Barbaracampbell/ The family requests that visitation be observed at Martin & Castille's DOWNTOWN Location on Wednesday, January 13, 2021 from 9:00 AM until time of services. Pallbearers will be Scott Campbell, John Bourgeois, Lawrence Cormier, Kevin Thompson, James Hickey, Michael Bourgeois and Marc Gambino, Jr. The Campbell family would like to give special thanks to the nurses and staff of Heart of Hospice and her caregivers Denise Credeur, Judy Bailey and Monique Bush for their kindness, compassion and loving care given to Mrs. Campbell and her family during their time of need. View the obituary and guestbook online at www.mourning.com Martin & Castille - DOWNTOWN, 330 St. Landry Street, Lafayette, LA. 70506. 337-234-2311

With the deepest felt sorrow, the children of Barbara Waddell Campbell, 90, announce her passing from this life on January 10, 2021. Born June 21, 1930 in Pensacola, FL she completed the family of Henry Beckett and Thelma Ernestine Waddell. Upon... View Obituary & Service Information

The family of Barbara Waddell Campbell created this Life Tributes page to make it easy to share your memories.

With the deepest felt sorrow, the children of Barbara Waddell...

Send flowers to the Campbell family.