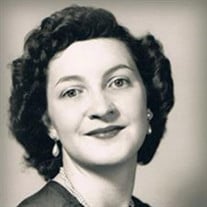 Funeral services will be held on Friday, July 23, 2021 at 11:00 AM in Martin & Castille's La Fleur de Lis Chapel in Lafayette for Barbara Ann Speer Forehand Latiolais, age 88, who peacefully passed away on Saturday morning, July 17, 2021 at Pelican Pointe Healthcare and Rehabilitation Center in Maurice. The family requests that visitation be observed in Martin & Castille's SOUTHSIDE location on Friday from 8:30 AM until time of services. Reverend Chris Fuselier, Pastor of First Baptist Church of Youngsville, will conduct the funeral services. Interment will be in the Bumstead Cemetery in Warren, Texas on Saturday, July 24, 2021 at 2:00 PM under the direction of Riley Funeral Home in Woodville, Texas. Pastor Edwin Findley will officiate. Survivors include her sons, John Richard "Rick" Forehand and wife Karen, Ronald Wayne "Ronnie" Forehand and wife Susie; her daughter, Dawn Latiolais Justin and her husband Paul; her grandchildren, Joseph Wayne Forehand and wife Laurel, Jennifer Forehand O'Quain, Mathew Christopher Forehand, Corey Brandon Forehand and wife Julie, Alex Shelton Forehand and wife Mandi, BreAnne Marie Justin, Paul Joseph Justin, and Miles Robert Justin; her great grandchildren, Abigail Forehand, Silas Forehand, Loa O'Quain, Laydon O'Quain, and Charlotte Forehand; her sister, Lillie Paralee Price; and many loving nieces and nephews. She was preceded in death by her first husband, Herbert Wayne Forehand; her second husband, Joseph U. Latiolais; her parents, Richard Edward Speer and Lottie Mae Manning Speer; her brothers, James Edward Speer and his wife Jan, and Johnny Joe Speer and his wife Sammie; and her granddaughter, Renee Huestis. Barbara was affectionately known to her family as "Bob". She was born on October 28, 1932 in Smackover, AR. Growing up with a father who worked in the "oil patch", their family moved often. She was very close to her grandparents and had many friends. From the day she could talk, she was witty and funny; Barbara was also strong, passionate about her family, and loved to sing. Barbara was a self proclaimed "fighter" which proved true till the end. She met her first husband Herbert in Seminole, TX, and they had 2 sons, Ricky and Ronnie. Herbert became ill at the age of 30 and passed away. Barbara continued attending "beauty school" and raised her boys while working as a beautician in Houma, LA, where she met Joe Latiolais, marrying him in 1969. Two years later, she gave birth to their daughter, Richelle Dawn, and moved to Lafayette in 1974. She was an avid bowler, a wonderful cook, and was known for her famous biscuits! In the year 2000, Barbara was diagnosed with Alzheimer's and has fought a courageous battle since. She may not have been able to find her memories, but she remained cheerful, fun loving, and blessed everyone by singing them her favorite song, "You Are My Sunshine". "Life is somethin', ain't it" ......Barbara Memorial contributions can be made in Barbara Latiolais' name to Traditions Hospice or to the Alzheimer's Association. A heartfelt appreciation is extended by Barbara's family to the caregivers and staff of Pelican Pointe Healthcare and Rehabilitation Center, and also to the caregivers with Traditions Hospice for their care and compassion. View the obituary and guestbook online at www.mourning.com Martin & Castille-SOUTHSIDE-600 E. Farrel Rd., Lafayette, LA 70508, 337-984-2811

Funeral services will be held on Friday, July 23, 2021 at 11:00 AM in Martin & Castille's La Fleur de Lis Chapel in Lafayette for Barbara Ann Speer Forehand Latiolais, age 88, who peacefully passed away on Saturday morning, July 17, 2021 at... View Obituary & Service Information

The family of Barbara Ann Speer Forehand Latiolais created this Life Tributes page to make it easy to share your memories.

Send flowers to the Latiolais family.