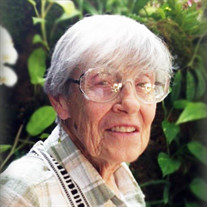 Beverly Dalferes Latimer (b. 1926), longtime director of the Lafayette Natural History Museum and Planetarium, died peacefully Tuesday at Cypress House, the home in which she lived for 60 years and in which she and her husband Ewing Craig Latimer,... View Obituary & Service Information

The family of Beverly Dalferes Latimer created this Life Tributes page to make it easy to share your memories.

Send flowers to the Latimer family.