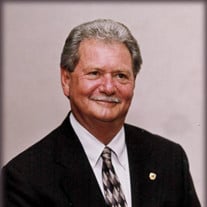 Catholic Funeral Services will be held for Mr. Bobby Lee Duhon at 10:00 AM on Thursday, May 13, 2021 in Martin and Castille's La Fleur de Lis Chapel, 600 E. Farrel Rd., Lafayette, La 70508. Bobby went home to be with the Lord Jesus on Monday, May 10, 2021. He peacefully passed away at his residence with his family by his side. The family request that visitation be observed at Martin and Castille's SOUTHSIDE location, 600 E. Farrel Rd., Lafayette, La. 70508 on Wednesday, May 12, 2021 from 1:00 PM until 8:00 PM with a recitation of the rosary at 6:00 PM. Visitation will resume on Thursday, May 13, 2021 from 8:00 AM until the time of service at 10:00 AM. Entombment will be in St. Alphonsus Mausoleum. The Very Reverend Chester C. Arceneaux,VF, Rector of Cathedral of St. John the Evangelist, will conduct the funeral services. Bobby was a graduate of Judice High School and also obtained a Business Degree from Spencer Business College. He proudly spent his whole life in the Oil and Gas Industry in which he was part owner of Specialty Machine and Supply. One of his greatest passions was entertaining and caring for his customers. He was always a very hard worker and a man of strong faith. He was a member of St. Alphonsus Catholic Church and the pinnacle of his faith was attending Cursillo number 420. He was an active owner of race horses and served on the Board of Directors with the Louisiana Thoroughbred Breeders Association. He was a lifetime member of Woodmen of the World and was the current president of Lodge 714, of Maurice, La. He served as State Jurisdictional President and National Woodmen of the World Representative. He also served on the board for Lafayette Water Works District South. Some of his hobbies included deer hunting, duck hunting, dove hunting, golf, cooking and playing card games with his Cajun buddies. Although Bobby was well accomplished in his career and very active in his community, his passion in life was family and especially his grandchildren. He will be deeply missed and memories of him will be cherished by all who knew him. Left behind to cherish his memory is his loving wife of 59 years, Mrs. Linda Rose Deshotels Duhon; his daughter, Suzanne Duhon Payne and her husband Sandy; his daughter, Melanie Duhon Roberts and her husband Bryan; his son, Dirk Duhon and his wife Christina; his grandchildren, Ainslie Vannoy (Garet), Macie Thibodeaux, Taylor Leon, Julian Leon, Hunter Duhon, Carson Duhon and Kinley Duhon and soon to be great-grandchild; his sister, Earline Duhon Leleux and his brother, Ronous Duhon. He was preceded in death by his parents, Adless Duhon and Ella Mae Gilbert Duhon; his infant daughter and his infant sister, Evelyn Duhon. Upholding the honor of pallbearers will be Dirk Duhon, Hunter Duhon, Carson Duhon, Julian Leon, Sandy Payne and Bryan Roberts. Honorary Pallbearers will be Howard Patin, Freddy Deshotels, Ainslie Vannoy, Macie Thibodeaux, Taylor Leon and Kinley Duhon. A heartfelt appreciation is extended by the Duhon family to Dr. Ryan Chauffe and NSI for the compassonate care given to Mr. Bobby in his time of need. View the obituary and guestbook online at www.mourning.com Martin & Castille-SOUTHSIDE- 600 E. Farrel Rd., Lafayette, LA 70508, 337-984-2811

Catholic Funeral Services will be held for Mr. Bobby Lee Duhon at 10:00 AM on Thursday, May 13, 2021 in Martin and Castille's La Fleur de Lis Chapel, 600 E. Farrel Rd., Lafayette, La 70508. Bobby went home to be with the Lord Jesus on Monday,... View Obituary & Service Information

The family of Bobby Lee Duhon created this Life Tributes page to make it easy to share your memories.