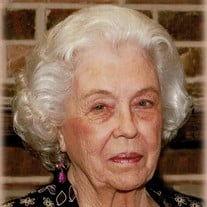 Funeral services will be held on Thursday, April 21, 2022, at 2:00 pm in La Chapelle de Martin & Castille in Lafayette for Bonnie Ruth Latiolais Sinclair, 87, who passed away on Friday, April 15, 2022, at her residence in Lafayette surrounded by her loving children. Reverend Mario Romero, Pastor of Holy Cross Catholic Church in Lafayette, will conduct the funeral services. Entombment will be in Calvary Cemetery Mausoleum. Survivors include one son, David W. Sinclair; one daughter, Jackie T. Sinclair; two grandchildren, Jennifer Leger, and Eric Leger and his wife, Lindsey; three great-grandchildren, Kole M. Hartdegen, Owen M. Leger, and Elliott T. Leger; and one niece, Sherry D. Stagg, and her children. She was preceded in death by her beloved husband of 67 years, Jackson J. Sinclair; her parents, Una and E.C. Latiolais; and one sister, Jennise L. Darbonne and her husband, Joseph L. Darbonne. Bonnie was born on October 31, 1934, in Lawtell. Louisiana. Bonnie met her husband Jack in Lake Charles, Louisiana, who was stationed at Chenault A.F.B. They were married on January 2, 1954, and together they lived a military life. In 1963 they were transferred to Hickam A.F.B. in Oahu, Hawaii. In April of 1966 they were transferred to Travis A.F. B., California. In June of 1972 following Jack's retirement from the Air Force they returned to Lafayette, Louisiana and have resided there since that time. Bonnie was a graduate of Lawtell High; received an A.A. degree from Solono Jr. College in Vallejo, California; received a B.S. from the University of Davis, California; and attended LSU to receive her Master's Degree in social work. She also earned a B.A. from ULL in non-categorical preschool. Bonnie was a teacher at Hickam A.F.B. and Travis A.F.B. Upon returning to Louisiana, Bonnie was employed by the State as a social worker with children in foster care and blind services. She retired from the State in 1994. Returning to the classroom in Vermilion Parish to continue her love of teaching until 1996. She loved traveling with her husband Jack in their motorhome, throughout the United States and Canada. They belonged to the Cruisin' Cajuns Camping Club, C'est La Vie Camping Club, NCHA Campers Holiday Ramblers, and the SMART Cajuns (special military active and retired travel club). She was a former member of Imperial St. Landry Genealogical Society and the Daughters of the American Revolution. Pallbearers will be Chris Clark, Matthew Stagg, Ethan Stagg, Eric Leger. The family requests that visitation be observed in Martin & Castille's DOWNTOWN location on Thursday, April 21, 2022, from 10:00 am until time of services. A heartfelt appreciation is extended by the Sinclair family to the doctors, nurses, and staff of N.S.I. Hospice in Lafayette, and Divine Nursing Services. View the obituary and guestbook online at www.mourning.com Martin & Castille-DOWNTOWN-330 St. Landry St., Lafayette, LA 70506, 337-234-2311

Funeral services will be held on Thursday, April 21, 2022, at 2:00 pm in La Chapelle de Martin & Castille in Lafayette for Bonnie Ruth Latiolais Sinclair, 87, who passed away on Friday, April 15, 2022, at her residence in Lafayette surrounded... View Obituary & Service Information

The family of Bonnie Ruth Latiolais Sinclair created this Life Tributes page to make it easy to share your memories.

Send flowers to the Sinclair family.