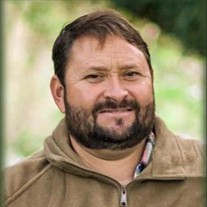 A Mass of Christian Burial will be held on Tuesday, July 13, 2021 at 2:00 PM in St. Joseph Catholic Church in Rayne for Brent James Menard, 44, who died on Thursday, July 8, 2021 at MD Anderson in Houston, Texas. Interment will be in St. Joseph Catholic Cemetery #2 in Rayne. Reverend Brent L. Smith, Pastor of St. Joseph Catholic Church in Rayne, will conduct the funeral services. Reverend Aaron Melancon, Pastor of St. Theresa, of the Child Jesus, Catholic Church in Duson, will be the con-celebrant for the funeral services. Survivors include his beloved wife and best friend, Jamille Robin Menard; four children, Jeanne, Brielle, Camille and Jacque Menard; his beloved dog, Lucky; parents, Anna and Bradley Menard; brother, Brian Menard; mother and father in law, Francine and Joey Robin; brother in law, Brandt Robin and his wife Jamie; nieces and nephews. He was preceded in death by maternal grandparents, Abel and Ida Lavergne Lanclos; paternal grandparents, Skurdy and Gertie Labbe Menard; great grandmother, Letha Labbe. Brent was the owner and operator of Menard Sewer and Drain Service for 15 years. With his true passion being crawfishing since a young age, he began crawfishing full time in 2016. Brent was an avid deer hunter who enjoyed spending time with his family at their two deer camps in Sherburne and Cloutierville, Louisiana. Most of all, he enjoyed spending time with his wife and children crabbing and fishing in Grand Chenier at their property on the Mermentau River. Brent never passed up his wife’s cajun cooking accompanied with a good cold beer, their nearly daily lunch dates, exploring and eating at new restaurants, ice cream dates with his family, vacations to Destin, Florida, and attending his children’s softball and baseball games while giving his famous good thumbs up for a good play. Most of all, he cherished the moments when his children referred to him as “Big Daddy”. Pallbearers will be Jacque Menard, Joey Robin, Brandt Robin, Cameron Robin, Robbie Meaux, and Jay Alleman II. The family requests that visitation be observed in Martin & Castille's SOUTHSIDE Location on Tuesday, July 13, 2021 from 10:00 AM to 1:00 PM. A Rosary will be prayed by Rayne Catholic students on Tuesday, July 13, 2021 at 11:00 AM at the funeral home. Memorial contributions can be made in Mr. Menard's name to St. Jude Children’s Hospital. A heartfelt appreciation is extended by Brent personally to his inlaws, Francine and Joey Robin, for tirelessly assisting in the care of his children for the last five and a half years due to trips to MD Anderson Hospital. The family would like to thank his entire medical team at MD Anderson Hospital, and his two surgeons, the Sugarbaker brothers, who also assisted with Brent’s care. View the obituary and guestbook online at www.mourning.com Martin & Castille-SOUTHSIDE-600 E. Farrel Rd., Lafayette, LA 70508, 337-984-2811

A Mass of Christian Burial will be held on Tuesday, July 13, 2021 at 2:00 PM in St. Joseph Catholic Church in Rayne for Brent James Menard, 44, who died on Thursday, July 8, 2021 at MD Anderson in Houston, Texas. Interment will be in St. Joseph... View Obituary & Service Information

The family of Brent James Menard created this Life Tributes page to make it easy to share your memories.

A Mass of Christian Burial will be held on Tuesday, July 13,...

Send flowers to the Menard family.