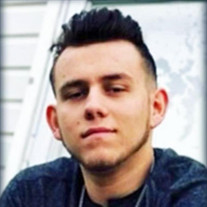 A Celebration of Life will be held on Saturday, January 30, 2021 at 2:00 PM in La Chapelle de Martin & Castille in Lafayette in Lafayette, for Brent Allen Miller, age 21, who passed away on Friday, January 22, 2021. The family requests that visitation be observed in Martin & Castille's DOWNTOWN location on Friday from 11:00 AM to 10:00 PM with a rosary recited at 7:00 PM. Visitation will continue on Saturday at 10:00 AM until time of service. Deacon Butch Hebert, with St. Bernard Catholic Church in Breaux Bridge will conduct the funeral services. A mask is REQUIRED to attend the visitations and funeral. The family thanks you in advance. For family members and friends who are unable to attend on Saturday, January 30, 2021, at 2:00 PM, the service will be live-streamed to a Memorial Facebook Group dedicated to Brent Allen Miller. To join the group, click the link below and then "join group". The video will appear on this group at service time 2:00 PM. You may also share memories, pictures and condolences to the family in this group. Facebook link: www.facebook.com/groups/BrentAllenMiller Left to cherish his memory is his girlfriend, Kylie Comeaux; his parents, mother, Tonya Trahan Miller and fiance, Josh Soileau and father, Steven Miller and Heather Russo; his siblings, Adam Miller, Kyle Miller (Chanise), Ashlie Miller, Shai Miller, Tatem Miller, Landen Soileau, and Sophie Soileau; his maternal grandparents, Weston "Wes" and Lara Dever Trahan and Ted and Rose Courville Hebert; his paternal grandparents, Barbara Romero Miller, and Kenneth and Catherine Tate Soileau Gidlow; his aunts and uncles, Destiny "Auntie" Trahan and Brock "Unk" Richard, Shawn Hebert (Kirsten), Trevor Hebert (Amy), Danny Miller (Kim), and Cody Soileau (April); his nephew and Godchild, Ryker Alan Miller; his Godparents, Marius "Bee" and Margaret "Nanny" Knott; his great-grandparents, James "Jimmy" and Betty Latiolais Trahan; and great-grandfather, John Dever. Brent was preceded in death by his uncles, Justin Alan Trahan and Jeremy Anthony Trahan; his grandparents, Lorina Courville, John Courville, Sr., Lawrence Lee Miller; and great-grandmother, Emilie Hebert Dever. A resident of Lafayette, Louisiana for most of his life, Brent was a graduate of Acadiana High School, Home of the Wrecking Rams, class of 2017. He was the Football Team Equipment Manager from 2013 to 2017, receiving two state championship rings along with the team. Brent was proud of his Rams & his Rams were proud of Brent. He was very mechanically inclined. Shortly after turning 18, he established employment at Florida Marine as a deckhand, obtained a Tankerman certification, and later moved into a deckineer role working towards his Engineer certification. Brent worked hard, played hard and loved hard. He never met a stranger and will be remembered as the life of the party. Brent was a loving and kind soul and had a heart of gold. He always had a soft spot for the little ones, especially his little cousins and his Godchild. He was the protector of those he loved, especially his siblings, Auntie, and his momma. Brent enjoyed spending time with family and friends. Many of the gatherings would include an intense, competitive game of UNO with his siblings, cousins, auntie, unk, as well as his crew members while on the boat. Even crew members from other boats that were docked in the port would join in. He will be missed dearly by all who loved him. Pallbearers will be Austin Hebert, Brock Richard, Cody Soileau, Cainnon Meche, Logan Trahan, Justin Roberts, Lance Estillette, and Nick Cummings. Honorary Pallbearers will be Kyle Miller, Scott Begnaud, and Adam Miller. Memorial contributions can be made in Brent Allen Miller's name to Rosa’s Angels, C/O Robin McMillan, 113 Choctaw Rd. Lafayette, LA, 70501. A heartfelt appreciation is extended by Brent’s family to his employer, Florida Marine Transportation, all Emergency Responders, and Our Lady of Lourdes Emergency Center in Scott, LA. View the obituary and guestbook online at www.mourning.com Martin & Castille-DOWNTOWN-330 St. Landry St., Lafayette, LA 70506, 337-234-2311

A Celebration of Life will be held on Saturday, January 30, 2021 at 2:00 PM in La Chapelle de Martin & Castille in Lafayette in Lafayette, for Brent Allen Miller, age 21, who passed away on Friday, January 22, 2021. The family requests that... View Obituary & Service Information

The family of Brent Allen Miller created this Life Tributes page to make it easy to share your memories.

Send flowers to the Miller family.