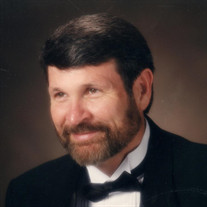 Memorial services honoring the life of Buddy Bullen will be held on Wednesday, April 20, 2022 at 1:00 PM at Martin & Castille Funeral Home - Downtown in Lafayette. Buddy,79, peacefully passed away on Wednesday, April 13, 2022 in Lafayette. The family requests that visitation be observed in Martin & Castille's DOWNTOWN location on Wednesday from 9:30 AM until time of services. Pastor Linton Broussard, Care Pastor of The Bayou Church in Lafayette, will conduct the funeral services. Survivors include his wife, Donna Andrus; two daughters, Amanda Robbins and husband David and Libby McMahon; sister, Susie Bates; two brothers, Johnny Bullen and wife Pat and Leon Bullen and wife Dee; four grandchildren, William, Andrew and wife Michaela, Annie Robbins and Caleb Stutes and many beloved nieces and nephews. He was preceded in death by his son, Chris Bullen; parents, Willard Morse Bullen, Sr. and the former Dorothy Shirley; and brother-in-law, Eugene Bates. Born on September 22, 1942, Buddy grew up in rural Jefferson County, Mississippi in the old family house among a large, multi-generational family. At home, he learned the value of love, family, and hard work. Buddy graduated from Jefferson High School in 1960 and headed to Copiah-Lincoln Community College in Wesson on a football and track scholarship. Afterwards, he continued his college studies at Mississippi State, graduating in 1964 with a Bachelor of Science Degree in Mathematics. Buddy joined Schlumberger Well Services right after graduation which put him on an exciting path leading to new adventures. His job led him to Louisiana initially. Later, he moved to Venezuela, Colombia, Ecuador, and Guatemala. During that time, Buddy had a fascinating assignment in the Amazon jungle, where he found a monkey that he brought home to surprise his family! Then, he was posted to Aberdeen, Scotland on the North Sea. Several years later he returned to the States. Buddy’s final assignment landed him permanently in Lafayette, Louisiana where he met and later married the love of his life, Donna Andrus, in 1990. Buddy loved to travel. He and Donna explored the country from coast to coast in their RV. They simply headed in a direction towards an interesting spot on the map, stopping along the way to explore a community, visit a national park, ride a rollercoaster -- anything interesting or adventurous. Photography was also one of Buddy’s lifelong interests; he took great pictures, and he took LOTS of them. But Buddy’s favorite hobby was visiting people and sharing stories. His travels provided opportunities to meet new friends and discover new places. His photographs preserved the memories. He immensely enjoyed Willie Nelson, fireworks, tools, anything that went fast, telling stories, building things, adventure, art, music, and football. Buddy’s faith in our Lord Jesus Christ was the foundation of his life. He had a heart for the people at his home church, The Bayou. At The Bayou, he greeted people at The Café door, volunteered with the teens, and served in the care ministry. International mission work fulfilled Buddy’s desire to serve Christ in a tangible way, as it married his love for people to his fondness for travel. He went on several mission trips to Mexico where he served orphans and pastors and to Nicaragua where he worked on a construction team and a medical team. His ability to communicate in Spanish proved to be an invaluable asset. Buddy’s kindness, gentleness, and his love for the Lord were evident to all and were a source of strength and security to his family and friends. He was loved by all and will be greatly missed. Memorial contributions can be made in Buddy Bullen’s name to Hospice of Acadiana, 2600 Johnston St. Suite 200, Lafayette, Louisiana 70503 or a charity of your choice. A heartfelt appreciation is extended by the Bullen family to Nicole, Lindsey, and Mrs. Julie. View the obituary and guestbook online at www.mourning.com Martin & Castille-DOWNTOWN-330 St. Landry St., Lafayette, LA 70506, 337-234-2311

The family of Buddy Bullen created this Life Tributes page to make it easy to share your memories.

Memorial services honoring the life of Buddy Bullen will be held...

Send flowers to the Bullen family.