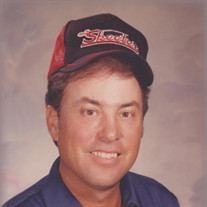 A Mass of Christian Burial will be held for Mr. Byron Bernard Gianfala at 2:00 PM on Monday, July 26, 2021 at Sts. Peter & Paul Catholic Church in Scott. Mr. Byron was 78 when he went home to be with the Lord on Wednesday, July 21, 2021 in Lafayette. The family requests that visitation be observed in Martin & Castille's SCOTT location on Monday, July 26, 2021 from 9:00 AM until time of services at 2:00 PM with a recitation of the rosary at 11:00 AM. Entombment will be in Sts. Peter & Paul Mausoleum in Scott. The Most Reverend Michael Jarrell, Bishop Emeritus, Diocese of Lafayette, will be the Celebrant of the Mass. Lectors will be Brandi Guidry Hollier and Leslie Hebert Castro. Byron was a graduate of Church Point High School in the class of 1961. Immediately after graduating he would answer the call of duty and join the United States Air Force where he served during the Vietnam Conflict. Upon his return from the military, Byron joined the family business in the oil and gas industry, Gianfala and Sons, Inc. He would then go on to start his own company in 1989 called Louisiana Pipeline and Construction, LLC. After selling his company in 1999 he became a consultant for the business he loved so much up until his retirement. Although he had many successful years in the oil and gas industry, Byron's true passion in life was fishing. Some of his greatest achievements in life were accomplished on the water. From first place finishes, to being sponsored by Skeeter Boats, Byron was truly a one of a kind angler. He was a charter member of the Lafayette Oilman's Bass Fishing Club where he served as president numerous times throughout the years. Some of his accomplishments were being awarded Fisherman Of The Year multiple times, founding fishing tournaments for charitable causes, and receiving a lifetime membership to the Lafayette Oilman's Bass Fishing Club. Later in life his passion carried over to saltwater fishing and he spent countless days on the water at Cypremort Point where he was known as "The Legend". Byron was a man of great faith and he adored his family. He was gifted with a heart of compassion and he will be deeply missed by all who knew him. Survivors include his beloved wife of 53 years, Mrs. Jacquelyn Chiasson Gianfala of Lafayette; one son, Brandon Bernard “LT” Gianfala of Lafayette; his brother, Kenneth Gianfala and his wife Shirlene and his sister, Pam Gianfala Hebert and her husband Louis. He was preceded in death by his daughter, Di Giovanni “Digi” Gianfala; his parents, Sebastian and Alyce Gianfala. Upholding the honor of pallbearers will be John Michael Chachere, Jr., Randolph Hart Newman, J. Taylor Desormeaux, Clayton Bradley Theard, Sr., Martin Zaunbrecher and Dr. Paul J. Azar, III Honorary pallbearers will be Tim Edwards, Preston Vincent, Charlie Roche and Teddy Leleux. Memorial contributions can be made in Mr. Byron Gianfala's name to support Parkinson's Research, The Michael J. Fox Foundation,Donation Processing, The Michael J. Fox Foundation, P.O. Box 5014, Hagerstown, MD 21741-5014 https://www.michaeljfox.org/donate/ A heartfelt appreciation is extended by the Gianfala family to all of his caregivers for the compassionate care given to Mr. Byron. View the obituary and guestbook online at www.mourning.com Martin & Castille-SCOTT-802 Alfred St., Scott, LA 70583, 337-234-2320

A Mass of Christian Burial will be held for Mr. Byron Bernard Gianfala at 2:00 PM on Monday, July 26, 2021 at Sts. Peter & Paul Catholic Church in Scott. Mr. Byron was 78 when he went home to be with the Lord on Wednesday, July 21, 2021 in Lafayette.... View Obituary & Service Information

The family of Byron Bernard Gianfala created this Life Tributes page to make it easy to share your memories.

A Mass of Christian Burial will be held for Mr. Byron Bernard...

Send flowers to the Gianfala family.