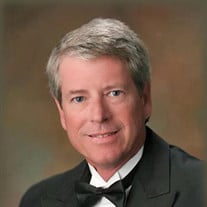 Memorial services will be held on Friday, December 3, 2021, at 11:00 AM in Martin & Castille's La Fleur de Lis Chapel in Lafayette for C. Barrett Greer, Jr., 62, who died on Tuesday, November 30, 2021, at his residence in Lafayette with family and friends by his side. Inurnment will be in Lafayette Memorial Park Cemetery Peace Chapel Mausoleum. Reverend Alan Trouille, Pastor of St. Philip Neri Catholic Church in Kinder, will conduct the memorial services. Lectors will be his sister, Candace Greer and his brother-in-law, Chad Pitre. Musical selections for the services will be "Here I Am, Lord", "Psalm 23", "Ave Maria", "Pie Jesu" and "The Prayer". Survivors include his beloved wife, Jan Pitre Greer, whom he affectionately called Breeze; his son, who was his world, C. Barrett Greer, III; his father, C. Barry Greer; one sister, Candace Greer; and two brothers, Clay Greer and his wife, Lisa, of Chesapeake, VA and Blake Greer and his wife, Courtney, of Lafayette, LA. He was preceded in death by his mother, Amma Elizabeth Webb. Barrett was a lifelong resident of Lafayette. He graduated from the University of Southwestern Louisiana with a Bachelors of Science Degree in Geology and was a member of Kappa Alpha Fraternity. Barrett was President of Greer Petroleum, Inc. and was known to be one of the best geologists in his field. He was a member of the Society of Independent Professional Earth Scientists. Barrett was a member of the Krewe of Gabriel. He was a Royal Duke in 2006 and was a Float Captain for twenty-six years. Barrett was also a member of the Krewe of Brigands de Lafitte. Barrett was an avid outdoorsman who loved hunting and deep sea fishing. He was a member of Greer Oaks in Grand Chenier. Barrett was also a sponsor of Ducks Unlimited. Honorary pallbearers will be C. Barrett Greer, III, Dwight Munchrath, C. Barry Greer, Clay Greer, Brett Boudreaux, Chuck Hebert, Doug Hudgins, Matt Chiasson and Bill Oliver. The family requests that visitation be observed in Martin & Castille's SOUTHSIDE location on Friday from 9:00 am until time of services. Memorial contributions can be made in Barrett's name to Hospice of Acadiana, 2600 Johnston St., Ste. 200, Lafayette, LA. 70506. A heartfelt appreciation is extended by the Greer Family to Leslie Carerre, NP, Linda Hogue, Dr. Gene Brierre and the nurses, staff and doctors of Hospice of Acadiana, for their kindness, compassion and loving care given to Barrett and his family during their time of need. View the obituary and guestbook online at www.mourning.com Martin & Castille-SOUTHSIDE-600 E. Farrel Rd., Lafayette, LA 70508, 337-984-2811

Memorial services will be held on Friday, December 3, 2021, at 11:00 AM in Martin & Castille's La Fleur de Lis Chapel in Lafayette for C. Barrett Greer, Jr., 62, who died on Tuesday, November 30, 2021, at his residence in Lafayette with family... View Obituary & Service Information

The family of C. Barrett Greer Jr. created this Life Tributes page to make it easy to share your memories.

Send flowers to the Greer family.