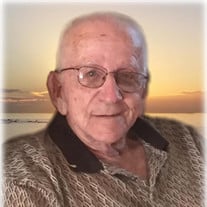 Funeral services will be held on Monday, August 17, 2020 at 3:00 PM in La Chapelle de Martin & Castille in Lafayette, for Carroll P. Cossich, Sr. , age 90, who died on Sunday, August 16, 2020 at Camelot Rehabilitation at Magnolia Park in Lafayette. The family requests that visitation be observed in Martin & Castille's DOWNTOWN location on Monday from 1:00 PM until time of service. Interment will be in Lafayette Memorial Park. Minister Danny Hebert, of Riverside Church of Christ, will conduct the funeral services. For friends and family members unable to attend, Mr. Cossich's service will be Live-streamed on his Memorial Facebook Group. Please click the link below and join the group where you can share pictures, memories, and condolences to the family. The video will appear on Monday at service time. Link: https://www.facebook.com/groups/CarrollCossichSr Survivors include his son, Marc Laine Cossich, Sr. and wife Monique; his daughters, Debbie Cossich Martin and Kelli Cossich Mercier and husband Todd; his grandchildren: Jay Baker (Sarah), Miranda Baker, Carroll Philip Cossich, III (Courtney), Jake Mercier, Molly Mercier, Laine Cossich and Wyatt Cossich; numerous great-grandchildren; his brother, Philip Cossich and wife Miriam; and his sister, Patsy Cossich Mann and husband Charlie. He was preceded in death by his wife, Bertha Nesby Cossich; his parents, Dimetry and Ruby Dugas Cossich; his son, Carroll Philip Cossich, Jr.; and his sister, Gerry Cossich Garcich. A resident of Buras, Louisiana for most of his life, Carroll was a loving husband, father, grandfather, and great-grandfather. He proudly served his country as a member of the United States Army in the Korean War. He was employed by Gulf Oil and retired from the company after more than 30 years. He was a member of the Buras Church of Christ where he was an Elder and volunteer. He coached youth baseball and was an avid New Orleans Saints fan. He loved living near the water; fishing and shrimping all of his life. Carroll loved being with his family and playing with his grandchildren who affectionately called him "Paw-Paw". Pallbearers will be Marc L. Cossich, Sr., Laine Cossich, Wyatt Cossich, Todd Mercier, Jake Mercier, Carroll P. Cossich, III, and Jay Baker. Honorary Pallbearers will be Philip Cossich, Sr., Charlie Mann, Eric Schoppe, Keith Schoppe, Philip Cossich, Jr., and Dimetry Cossich. Memorial contributions can be made in Carroll P. Cossich, Sr.'s name to Hospice of Acadiana, 2600 Johnston Street, Suite 200 Lafayette, LA 70503 www.hospiceacadiana.com. A heartfelt appreciation is extended by the Cossich family to Hospice of Acadiana, especially nurse Karen and the staff of Camelot Rehabilitation at Magnolia Park, especially Hilda Tom his CNA. View the obituary and guestbook online at www.mourning.com Martin & Castille-DOWNTOWN-330 St. Landry St., Lafayette, LA 70506, 337-234-2311

The family of Carroll P. Cossich, Sr. created this Life Tributes page to make it easy to share your memories.