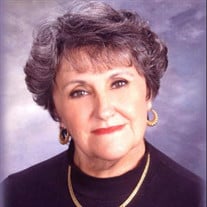 A Celebration of Life Service will be held on Monday, July 12, 2021 at 11:00 AM in La Chapelle de Martin & Castille in Lafayette, for Celia Guilbeau Soper, 81, who passed away at her residence in Lafayette on Sunday, July 4, 2021. The family requests that visitation be observed in Martin & Castille's DOWNTOWN location on Monday from 9:00 AM until time of services. Reverend Kenny Wright, Pastor of New Iberia Church of Christ in New Iberia, will conduct the funeral services. Celia graduated from Lafayette High School in 1957. She attended Newcomb college for one year where she focused her studies on English and art. She married Thomas Barrett and moved to Shreveport where her two daughters, Becky and Sarah, were born. Her lifelong interest in art and particularly sculpture, that was stimulated at Newcomb, began to blossom after the birth of her daughters. Long inspired by portrait sculptors like Rodin, and Malvina Hoffman, she decided she wanted to sculpt her girls. As luck would have it, a world class sculptor, Arthur Morgan, lived in Shreveport at the time. At first, dismissive of an ambitious young woman with no experience believing she could attempt that most difficult of subjects, he was soon to learn she was born to it. Seeing her ability, he allowed her to work as his apprentice, where she learned the techniques she would later put to good use. Her five- year marriage ended, but a life- long passion for sculpture and art was born. Celia moved back to Lafayette and married Herbert Thompson. Their son, Cole, was born in 1970. He too became the subject of several of Celia’s sculptures. His older sisters doted on him and affectionately accused him of being Mom’s favorite! Though this marriage ended also, Celia had three beautiful children that were the center of her universe! Over the years, her passion to create led her to growing bonsais, flower arranging, watercolor painting, and building furniture. One day that passion to create brought her to a taxidermy shop of all places. There, she met a young man who dreamed of being an artist. It was an unlikely match. He was 15 years younger and still enrolled in art at USL. But when it's written in the stars you just go with it! Celia never hesitated to act on her convictions! She married Patrick Soper in 1980 and for 40 years their shared passion bore fruit in numerous paintings, sculptures, books, murals and other collaborations. Working side by side with the love of her life, she finally realized the potential she had demonstrated to Arthur Morgan so many years before. Along the way, her three children, who amazingly still lived in Lafayette, bore fruit as well! One of Celia's greatest loves was in seeing her eight grandchildren and soon to come six great grandchildren. She engineered an annual event called the Fudge-a-thon where the kids would come over for a day of candy and cookie making. She loved being the matriarch and sitting back, letting the kids take charge. Celia had many dogs and cats over the years. She loved animals. In recent years, her cat Oreo, would take naps with her as they tuned in Gunsmoke. Celia, as an artist, believed in supporting all of the arts, and spent many years donating her time and talent to the Acadiana Symphony. She also loved literature and reading and was a strong supporter of the Lafayette Public Library. Probably the most amazing thing about Celia was her ability to talk to people. She was funny, and interested, and enthusiastic, sometimes irreverent, and once you met her, you never forgot her! She was a singular, solitary star in the sky, and for those who knew her, the world will be a dimmer place! Survivors include her beloved husband, Patrick Soper; her daughter, Becky Lowe, and her husband, Mark Lowe; daughter, Sarah Walker, and her husband, Luke Walker; son, Cole Thompson, and his wife Jenny Thompson, and grandchildren; Jessica LeMaistre, and her husband, Court, Cammy McGehee, and her husband, William McGehee III, Sarah Thigpen and her husband Chris, Rachel Saravia and her husband Ari, Ben Walker, Regan Thompson, Grant Thompson, and six great grandchildren; Caroline LeMaistre, Charles LeMaistre, William McGehee IV, and Celia Ann McGehee, Elizabeth Thigpen, and Elijah Thigpen, and brother, Thomas Guilbeau. Celia was preceded in death by her parents, Dr. Eric E. Guilbeau and his wife, Sara Womack Guilbeau, and grandson, Mark Lowe Jr. Memorial contributions can be made in Celia Guilbeau Soper's name to acadianasymphony.org and lplfoundation.org A heartfelt appreciation is extended by the Soper family to Violinist, Lauren Baker and her accompanist for performing at the service. View the obituary and guestbook online at www.mourning.com Martin & Castille-DOWNTOWN-330 St. Landry St., Lafayette, LA 70506, 337-234-2311

A Celebration of Life Service will be held on Monday, July 12, 2021 at 11:00 AM in La Chapelle de Martin & Castille in Lafayette, for Celia Guilbeau Soper, 81, who passed away at her residence in Lafayette on Sunday, July 4, 2021. The family... View Obituary & Service Information

The family of Celia Ann Soper created this Life Tributes page to make it easy to share your memories.

A Celebration of Life Service will be held on Monday, July 12,...

Send flowers to the Soper family.