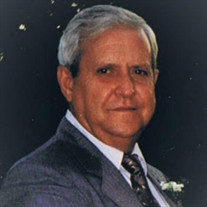 A Catholic Funeral Mass will be held on Wednesday, January 6, 2021, at 11:30 AM in St. Alphonsus Catholic Church in Maurice, for Clifford "Tee" Foreman, 83, who passed away at his residence in Lafayette on Saturday, January 2, 2021. The family requests that visitation be observed in Martin & Castille's SOUTHSIDE location on Tuesday from 1:00 PM to 8:00 PM and on Wednesday from 8:00 AM until 11:00 AM. A Rosary will be prayed Tuesday evening at 6:30 PM in Martin & Castille Funeral Home. Entombment will be in St. Alphonsus Mausoleum in Maurice. Reverend Paul Bienvenu, Pastor of St. Alphonsus Catholic Church in Maurice, will be the celebrant of the Funeral Mass. Survivors include his daughters, Germaine Foreman Leger, wife of John L. Leger, and Laurie Foreman Leger, wife of Kenneth P. Leger, Sr.; sons, Farrel L. Foreman, husband of Mitch Foreman, and Gregory D. Foreman; five grandchildren, Patrick C. Trahan, Leonard Leger, Kenneth P. Leger, Jr., Lacy Leger Storms, and Joseph K. Leger; eight great grandchildren, Morgan, Peyton, and Rylie Trahan, Brennen and Hollynn Storms, Matthew, Caleb and Isabella Leger; his brothers, Wilbert "Black" Foreman and Elwood Foreman. He was preceded in death by his beloved wife, Bonny Bell D. Foreman; two daughters, Ozea Dean Foreman and Diana Faye Foreman Trahan; his parents, Edia Abshire Foreman and Joseph Minos Foreman; grandson, Matthew R. Trahan; son-in-law, Shelton Bouley Foreman; sister, Mary Foreman Clark; and brothers, Eldes Foreman, Shelton Foreman and Leewood Foreman. A resident of Lafayette, Louisiana for most of his life, Clifford "Pop" as he was affectionately known to his family, loved his wife, children, grandchildren, and great-grandchildren dearly. He and his wife, the late Bonny Bell D. Foreman were married for 61 years. Pop worked for the Lafayette Parish School Board until retiring at the age of 55. Pop was a true Cajun and loved to sing and play the triangle, his favorite song was "The Bottle" (La Bouteille). During the daytime, you could find him in his garden or fishing with family and friends. Pop made a variety of homemade wines and cracklin which his wife would taste-test for approval. He was a charismatic man with a fun loving spirit, always dancing and playing cards with his wife and friends. Pallbearers will be Leonard "Bubba" Leger, Michael Storms, Kenneth Paul Leger, Jr., Patrick C. Trahan, James Meche, Jr., and Corey Bergeron. Honorary Pallbearers will be Matthew Paul Leger, Caleb Michael Leger, and Brennen Michael Storms. A heartfelt appreciation is extended by the Foreman family to Betty Trahan Alleman, a dear friend of Clifford who helped care for him over the past year and to the staff of St. Joseph's Hospice, especially Trisha for their compassion. View the obituary and guestbook online at www.mourning.com Martin & Castille-SOUTHSIDE-600 E. Farrel Rd., Lafayette, LA 70508, 337-984-2811

A Catholic Funeral Mass will be held on Wednesday, January 6, 2021, at 11:30 AM in St. Alphonsus Catholic Church in Maurice, for Clifford "Tee" Foreman, 83, who passed away at his residence in Lafayette on Saturday, January 2, 2021. The family... View Obituary & Service Information

The family of Clifford "Tee" Foreman created this Life Tributes page to make it easy to share your memories.

A Catholic Funeral Mass will be held on Wednesday, January 6,...

Send flowers to the Foreman family.