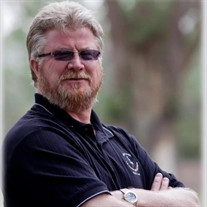 Funeral services will be held on Sunday, May 16, 2021 at 4:00 PM in One Church, 211 J B Road, Lafayette, Louisiana, 70506, for Clifford "Cliff" Dale Jones, 67, who passed away on Tuesday, May 11, 2021 at Our Lady of Lourdes Regional Medical Center in Lafayette. The family requests that visitation be observed in Martin & Castille's DOWNTOWN location on Saturday from 4:00 PM to 8:00 PM and will continue on Sunday from 1:00 PM until time of services. Interment will be in St. Alphonsus Cemetery in Maurice. Pastor Bobby Richard will conduct the funeral services. Survivors include his wife, Christine Buchan Whyte Jones; his daughter, Shelley Jean Jones Broussard and her husband Jeremy; his step daughter, Kathryn Elizabeth Lockna Buchan; his step sons, John Gibb Buchan and his wife Stephanie, and Paul Gilbert Cevallos-Buchan and his wife Sarai; his grandchildren, Ethan Herzing, Arya and Lucy Cevallos-Buchan; Samara and Saydee Broussard; and Evelyn, Clara, and Elizabeth Buchan; his sister, Joyce Jones; his brothers, Gary Jones, and Kenneth Jones and his wife Jo; his brothers in law, Jake Box, Jesse Nance and his wife Debbie, Willie Whyte and his wife Jo, and John Whyte and his wife Eliana; and his sisters in law, Margaret Morgan and Elizabeth Nance; and numerous nieces, nephews, cousins and great friends. He was preceded in death by his parents, Clifton Manuel Jones and Nora Estherlee Perry Jones; his first wife, Pamela Cheryl Nance Jones, and her parents, Evelyn Miller Nance and Albert Britten "A.B." Nance; his son, Cody Brandon "Codeman" Jones; his sisters, Wanda Box, and Carol Ann Roberts and her husband Bill; his wife Chris' parents, Gilbert and Elizabeth Whyte; his brothers in law, Alex Morgan and Albert Loran "Butch" Nance. Cliff was a man with a heart of gold and a hard worker. He was passionate about his country, and served in the United States Army from April of 1974 through March of 1979. He worked at Conoco Phillips, which then became Sentinel Transportation, as manager of transportation terminals in various states for over 37 years. Retiring in 2017, he then devoted his time and life to loving on his family, grandchildren, and his many friends. He was a light to so many, and never met a stranger. He had an impact on so many people. Cliff always wanted to share the love of Jesus and if he had a hobby, it would be helping others. Cliff loved motorcycles, cars and trucks, traveling and music-especially Chris Botti, but most of all, he loved spending time with his family. Pallbearers will be Jeremy Broussard, John Buchan, Paul Cevallos-Buchan, Kenneth Jones, Gary Jones, Ethan Herzing, Evin Trahan and David Nance. Honorary Pallbearers will be Darren Jones, Mike Nichols, Ronald Gunner, and Pete Gauthier. A heartfelt appreciation is extended by the Jones family to Sr. Uyen Vu at Our Lady of Lourdes Regional Medical Center for her care and compassion, and the many, many people that have shared their personal stories of how Cliff touched their lives. View the obituary and guestbook online at www.mourning.com Martin & Castille-DOWNTOWN-330 St. Landry St., Lafayette, LA 70506, 337-234-2311

The family of Clifford Dale Jones created this Life Tributes page to make it easy to share your memories.

Send flowers to the Jones family.