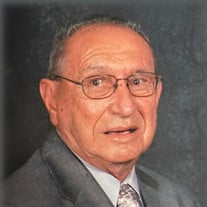 Mass of Christian Burial will be held for Mr. Clifton P. Broussard at 1:00 PM on Thursday, December 17, 2020 in St. Joseph Catholic Church in Milton. Mr. Clifton was 91 when he went home to be with the Lord on Sunday, December 13, 2020 at his residence in Franklin surrounded by his family. The family requests that visitation be observed in Martin & Castille's SOUTHSIDE location on Thursday, December 17, 2020 from 10:00 AM until the time of services at 1:00 PM. A loving husband, father, grandfather, great-grandfather, great-great grandfather to both families. He was a hard worker and has been working since the age of 16. He retired as a supervisor of the Department of Transportation of the mechanic shop. Some of his hobbies included gardening, dancing and listening to Cajun French music. He was a former member of CFMA and also Milton Civic Club. He taught his children to swim in a canal. He will be deeply missed by all who knew him. A Rosary will be prayed on Thursday, December 17, 2020 at 11:00 AM at Martin & Castille's Funeral Home SOUTHSIDE location. Entombment will be in St. Joseph Mausoleum in Milton. Reverend William Schambough, Pastor of St. Joseph Catholic Church in Milton, will conduct the funeral services, assisted by Deacon Cody Miller. Survivors include his loving wife, Mrs. Dolores Johnson-Broussard; his children, Evelyn Tisdale, Elaine Walker (Mark), Charlotte Broussard, David Broussard (Linda); nine grandchildren; thirteen great-grandchildren; eleven great-great grandchildren, step children, Lisa Moss (Walton), Becky Barrilleaux (Craig), Blake Johnson (Pam), seven step grandchildren, nine step great-grandchildren and he loved them all. Also survived by his brother in law, Norman Frederick(Claudia); sister in laws, Betty Frederick and Theresa Courville (Donald); brother in law, UJ Meche. He was preceded in death by his parents Mr. Nicholas Broussard and Mrs. Eve' Demet Broussard; his first wife, Audrey Frederick Broussard; his siblings, John V. "Pye" Broussard, (Infant)Velma Broussard; Alma Broussard Trahan; son-in-law, Harry Michael Tisdale. Also preceded in death by Zula Mae Tate, Betty Reed and Norma Meche. Pallbearers will be Nicholas Broussard, Shane Broussard, Ryan Miller, Brett Tisdale, Gregory Walker and Anthony Walker. Honorary Pallbearers will be Mark Walker, Marcel Broussard, Blake Johnson, Rob Miller, Walton Moss, Craig Barrilleaux, Charles Russo and Paul Manuel. A heartfelt appreciation is extended by the Broussard family to the nurses, staff and doctors of Hospice of Acadiana for their kindness, compassion and gentle care given to Mr. Broussard and his family during their time of need. Also a special thanks to Sherry Carter. View the obituary and guestbook online at www.mourning.com Martin & Castille-SOUTHSIDE-600 E. Farrel Rd., Lafayette, LA 70508, 337-984-2811

Mass of Christian Burial will be held for Mr. Clifton P. Broussard at 1:00 PM on Thursday, December 17, 2020 in St. Joseph Catholic Church in Milton. Mr. Clifton was 91 when he went home to be with the Lord on Sunday, December 13, 2020 at his... View Obituary & Service Information

The family of Clifton P. Broussard created this Life Tributes page to make it easy to share your memories.

Mass of Christian Burial will be held for Mr. Clifton P. Broussard...