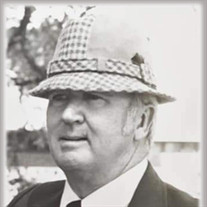 Coach Linden Joseph Bercegeay, Jr., AFSC, age 84, of Lafayette, Louisiana, peacefully passed away on Wednesday, October 20, 2021. He was born to the late Linden and Edith Bercegeay of Gonzales, Louisiana on August 31, 1937. A Mass of Christian... View Obituary & Service Information

The family of Coach Linden Joseph Bercegeay, Jr., AFSC created this Life Tributes page to make it easy to share your memories.