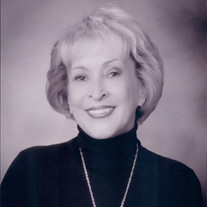 Funeral services will be held on Monday, February 14, 2022, at 1:00 pm in Martin & Castille's La Fleur de Lis Chapel for Constance "Connie" Faith Bernard Babin, 76, who passed away on Thursday, February 10, 2022, at her residence in Lafayette, surrounded by her family, peacefully in her sleep. The family requests that visitation be observed in Martin & Castille's SOUTHSIDE location on Sunday, February 13, 2022, from 3:00 pm to 6:00 pm and will continue on Monday from 11:00 am until time of services. A Rosary will be prayed on Sunday evening at 5:00 pm in Martin & Castille Funeral Home. Reverend Steven LeBlanc will conduct the funeral services. Interment will be in Lafayette Memorial Park Cemetery. Survivors include her husband, Emile Babin of Morgan City, LA; two daughters, Heather Caldwell (David) of Woodland Park, CO and Schuyler Kleinpeter of Lafayette, LA; her son, Harold Butch Shank (Gayle) of Jasper, GA; five grandchildren, Cassidy and Cody Caldwell, Trenton (Emma) and Mason Shank and Bailey (Tunney) King; two stepchildren, Scott and Shawna Babin; three sisters, Kaye Bernard, Lola Doucet (Judge Ned Doucet), Mary Dinkins (Ladd); three brothers, Glenn (Marlene), Ryan (Diana) and Paul Bernard; and very special friends, Maddie (Chad) Theriot, Mary Dubois, and Maugie Pastor. She was preceded in death by her parents, Reuben and Alice Bernard. Born on December 22, 1945, in Erath, Louisiana, Connie leaves behind a profound professional legacy that began under Dick Barra at Hebert Benjamin Associates. Before her more than 20-year tenure at the diocese, she was most noted for her vision and design of the current Frank’s Casing Crew logo. She expressed the love of her work at the Diocese of Lafayette until her very last days. As Director of Development, she was responsible for implementing the Bishop’s Services Appeal raising $2.67M before she retired, as well as helping church parishes adopt stewardship as a way of life in their own parishes. Connie was very active in the International Catholic Stewardship Council (ICSC), an affiliate of the United States Conference of Catholic Bishops, that supports and promotes the teaching of Christian stewardship and responsible philanthropy in the Catholic Church. As a member of ICSC’s board of directors from 2007 to 2014, she represented the 18 Catholic dioceses and archdioceses in the states of Alabama, Kentucky, Louisiana, Mississippi and Tennessee. She also served on the board’s strategic planning task force, and the organization’s conference planning and marketing committees. Connie touched many lives while here on earth. She was a doting, loving and nurturing mother who raised two girls on her own with her fervent faith and love of the Catholic Church, providing for and prioritizing them above herself. She reunited with her high school boyfriend, Emile, after 40 years. They married in 2006 and spent 16 years in love of God and each other. The friendships she made from 1st grade to her adult years remained fruitful and strong. Whether it was enjoying boating and her camp in Bayou Chein or going to the beach with her best friend/sister, Lola; playing cards with her card buddies; or cooking an elaborate meal for her closest friends, she will be deeply missed by all those who have been touched by her unconditional love and support. Pallbearers will be Cody and David Caldwell, Butch Shank, Scott Babin, Paul Bernard and Patrick LeBlanc. Honorary pallbearers will be Judge Ned Doucet, Ladd Dinkins, Glenn Bernard and Ryan Bernard. Memorial contributions can be made in Mrs. Babin's name to the Diocese of Lafayette, Bishop’s Services Appeal, 337-261-5604 (1408 Carmel Drive, Lafayette, LA 70501) or online at View the obituary and guestbook online at www.mourning.com Martin & Castille-SOUTHSIDE-600 E. Farrel Rd., Lafayette, LA 70508, 337-984-2811

Funeral services will be held on Monday, February 14, 2022, at 1:00 pm in Martin & Castille's La Fleur de Lis Chapel for Constance "Connie" Faith Bernard Babin, 76, who passed away on Thursday, February 10, 2022, at her residence in Lafayette,... View Obituary & Service Information

The family of Constance "Connie" Faith Bernard Babin created this Life Tributes page to make it easy to share your memories.

Send flowers to the Babin family.