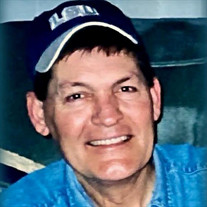 Memorial services will be held on Friday, March 12, 2021 at 1:00 P.M. in La Chapelle de Martin & Castille for Dale Anthony Stanford, 72, who passed away Monday evening, March 8, 2021 at his residence in Lafayette, with his wife and family at his side. Inurnment will be in St. John Cemetery Columbarium. Reverend Andrew Schumacher, Parochial Vicar of Cathedral of St. John the Evangelist, will conduct the memorial service. In order to help keep the community safe, all guests are required to wear a face covering and maintain social distancing at the funeral home. Thank you for understanding during this unprecedented time. Survivors include his beloved wife, Betty Smith Stanford of Lafayette; two sons, Josh Stanford and his wife, Paola of Pearland, TX and Jarred Stanford and his wife Kelli of Cypress, TX; five grandchildren, Sabrina Stanford, Duke Stanford, Bo Stanford, Cole Stanford and Jack Stanford; one sister, Barbara Nell Jarreau; and five brothers, Herman Stanford, Leo Stanford, Michael Stanford, Alton Stanford and Owen Stanford. He was preceded in death by his parents, Alton and Evangeline Thibodeaux Stanford; four sisters, Martha Manuel, Cecile Rodriguez, Philomena Matte, Kathleen Stanford; three brothers, John Stanford, Norman Stanford and Clayton Stanford. A native of Opelousas and graduate of Opelousas High School, Dale raised his family in Lafayette. He spent many years making friends throughout the Acadiana area as an insurance agent and then as an auto salesman at the Toyota and Lincoln-Mercury dealerships. He was well-liked, highly respected and took pleasure in his family and work. His greatest achievement in life was raising his family. He cherished his wife of 50 years, Betty Smith Stanford. Together they raised their sons and he was always there for his boys, whether they were involved in sports, bowling or fishing. He was their #1 supporter. He took great joy being involved with his grandchildren, keeping them close and having a special and unique relationship with each one. His favorite hobby was fishing. There was never a bad day fishing; it was always an opportunity to share the day on the water with a good friend or family member. The family wants to give special thanks to the amazing doctors and nurses who cared for Dale as he battled cancer over the past two years. He lived a good life and died knowing his work here on earth was done. We will keep his memory close and celebrate the life we shared with our "Papa Dale." Pallbearers will be his two sons, Josh Stanford and Jarred Stanford and his four grandsons, Duke Stanford, Bo Stanford, Cole Stanford and Jack Stanford The family requests that visitation be observed in Martin & Castille's DOWNTOWN location on Friday from 11:00 A.M. until time of services. A Rosary will be prayed on Friday at 12 Noon in Martin & Castille Funeral Home. Memorial contributions can be made in Mr. Dale Anthony Stanford's name to Hospice Compassus, 1018 Harding Street, Suite 207, Lafayette, LA 70503. View the obituary and guestbook online at www.mourning.com Martin & Castille-DOWNTOWN-330 St. Landry St., Lafayette, LA 70506, 337-234-2311

Memorial services will be held on Friday, March 12, 2021 at 1:00 P.M. in La Chapelle de Martin & Castille for Dale Anthony Stanford, 72, who passed away Monday evening, March 8, 2021 at his residence in Lafayette, with his wife and family at... View Obituary & Service Information

The family of Dale Anthony Stanford created this Life Tributes page to make it easy to share your memories.

Send flowers to the Stanford family.