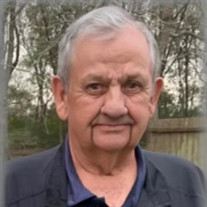 A Celebration of life service will be held for Mr. Danny Brown at 1:00 PM on Saturday, December 12, 2020 at Martin & Castille Funeral Home - SCOTT Location. On December 7, 1949, the good Lord brought Mr. Danny into this world and on December 7, 2020, He welcomed him back home and created the full circle of life. Mr. Danny passed away peacefully right after receiving his last sacrament. Visitation will begin at Martin & Castille Funeral Home - SCOTT location on December, 12, 2020 at 9:00 AM until the time of service at 1:00 PM. Reverend Howard Blessing will conduct the Celebration of Life Service in Scott. Mr. Danny was born in Eunice and also attended school in Eunice. Thereafter he enlisted in the Army and served his country for 2 years in the Vietnam War. He was a proud veteran and a man of faith. Upon returning from war, he met the love of his life, Debra. Danny was a very hard worker that made a career as a heavy machinery operator in the oil and gas industry working for several companies for over 40 years. He was a devoted husband, father, grandfather, great-grandfather and friend to many. He enjoyed spending time with his family, cooking, working in his yard and listening to Cajun music. He will be deeply missed by all who knew him. Left behind to cherish his memory, his beloved wife of 46 years, Mrs. Debra Moreau Brown; his son, Christopher "Scotty" Brown and his wife Sharon; his daughter, Danyelle "Renee" LeBlanc and her fiancé, Jonathan Habetz; his son, Richard "Ricky" Brown and his wife Tracy; his grandchildren Matthew Richard, Victoria "Tori" Brown, Scott Brown, Hayley Brown, Lani LeBlanc, Alec LeBlanc, Kyra Brown, Conner Brown, Jonathan "JC" Habetz and Brantley Habetz; his great-grandchildren Audii Miller, Jonah Brown and Aria Miller; his brother Michael Brown; his sister, Gwen Veillon and her husband Doc; his sister-in-law, Donna Brown and numerous nieces and nephews. He was preceded in death by his parents, Mr. Dewey Brown and Mrs. Effie Fontenot Brown; his brother, Bobby Brown; his nieces Tanya and Christina Brown and his sister-in-law, Linda Brown. A heartfelt appreciation is extended by the Brown family to the staff at Grace Hospice, especially Mr. Ron Mount for his compassionate care of Danny. View the obituary and guestbook online at www.mourning.com Martin & Castille-SCOTT, 802 Alfred Street, Scott, Louisiana, 70583, 337-234-2320

A Celebration of life service will be held for Mr. Danny Brown at 1:00 PM on Saturday, December 12, 2020 at Martin & Castille Funeral Home - SCOTT Location. On December 7, 1949, the good Lord brought Mr. Danny into this world and on December... View Obituary & Service Information

The family of Daniel Ray Brown created this Life Tributes page to make it easy to share your memories.

A Celebration of life service will be held for Mr. Danny Brown...

Send flowers to the Brown family.