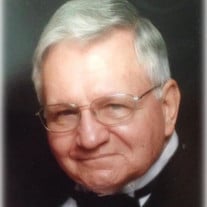 Delbert F. Pfannenstiel, 87, of Breaux Bridge, Louisiana, formerly of Kansas City, Missouri, passed away on February 9, 2021 after a long battle with Multiple Myeloma. Left to cherish his memory is his wife of 63 years, Carolyn Tosti Pfannenstiel. He is also survived by his children, Diane (Paul) Prejean, David Pfannenstiel, and Cheryl (Blake) Soileau; his seven grandchildren, Sarah (Marc) Doucet, Abby Prejean, Allie (Gene) Jenkins, Hannah Pfannenstiel, Isaac Pfannenstiel, Arlen (Conan) Soileau, and Hunter (Megan) Soileau and his five great-grandchildren, Madeline Jenkins, Spencer Jenkins, Caden Soileau, Brinn Soileau, and Amelia Doucet. He is also survived by six brothers, Eugene (Donna) Pfannenstiel of Washington, Val Pfannenstiel, Gerald (Suzanne) Pfannenstiel, Thomas (Carol) Pfannenstiel, Leon (Anna Jo) Pfannenstiel, and Paul (Robin) Pfannenstiel, and one sister, Donna (Lewis) Rosenblatt, all of Kansas City, Missouri, as well as numerous nieces and nephews. He was predeceased by his parents, Herman and Nellie Hertal Pfannenstiel, and one sister and brother-in-law, Jane (Jim) Kendzora. Delbert was born in Munjor, Kansas and shortly thereafter his family moved to Chelsea Avenue in Kansas City, Missouri, where he lived until he proudly served in the U.S. Army during the Korean War. He then married the love of his life and lived in the Kansas City area until 1976 when they moved to St. Joseph, Missouri; Independence, Missouri; Pineville, Louisiana; Muskgokee, Oklahoma; Baton Rouge, Louisiana; Denham Springs, Louisiana, and then Breaux Bridge, Louisiana. He was the light of his family and was always positive about any situation that came up. The family would like to thank Dr. Gene Brierre and his staff for all the medical care and support through the last few years. We would also like to thank the staff of Hospice of Acadiana. Memorial Services will be held on Sunday, March 7, 2021 at 2:00 PM in La Chapelle de Martin & Castille in Lafayette. Visitation will begin on Sunday at 1:00 PM until time of services. A reception will be held immediately follow the services at the home of Diane and Paul Prejean. In lieu of flowers, the family suggests that memorial contributions be made to the American Cancer Society, P.O. Box 22478 Oklahoma City, OK 73123 www.cancer.org or Hospice of Acadiana, 2600 Johnston Street, Suite 200, Lafayette, LA 70503 www.hospiceacadiana.com. For family members and friends unable to attend the Memorial Service on Sunday, we will be live-streaming through Zoom and Facebook. For the facebook live-stream, please click the link below then "join the group". Link: www.facebook.com/groups/DelbertPfannenstiel For the Zoom live-stream, please join the meeting using the Meeting ID listed below, the password is "Delbert". Zoom Meeting ID: 843 3932 1128 Password: Delbert View the obituary and guestbook online at www.mourning.com Martin & Castille-DOWNTOWN-330 St. Landry St., Lafayette, LA 70506, 337-234-2311

Delbert F. Pfannenstiel, 87, of Breaux Bridge, Louisiana, formerly of Kansas City, Missouri, passed away on February 9, 2021 after a long battle with Multiple Myeloma. Left to cherish his memory is his wife of 63 years, Carolyn Tosti Pfannenstiel.... View Obituary & Service Information

The family of Delbert Francis Pfannenstiel created this Life Tributes page to make it easy to share your memories.

Send flowers to the Pfannenstiel family.