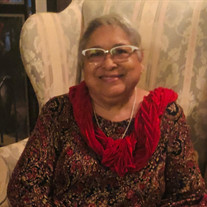 Toni Solis peacefully passed away August 20, 2021 at home in Lafayette, LA. Toni was born Christmas Day 1945 in San Antonio, TX. She graduated from Edison High School followed by Southwest Texas State where she earned a degree in education. She later studied for her master’s degree at Texas Women’s University. Toni was married to her husband, Samuel Solis, for more than 40 years until his death in 2017. Toni Solis was a passionate educator who impacted thousands of students through 43 years of teaching. She spent the majority of her career as a 1st Grade bilingual teacher at Daggett Elementary School in Fort Worth, TX. In recent years, Toni moved to Lafayette, LA to be close to her cherished grandchildren who were her greatest joy. She spent the last 7 years of her life attending countless activities, sharing her infectious laugh, and creating lasting memories with her son, his wife, and their two children. Toni will be laid to rest in San Antonio where she will be surrounded by family and love. A memorial service will be held in her honor later this year. Survivors include her son Javier Solis (Julie Solis), grandson Atticus Solis, and granddaughter Camille Solis. She is also survived by her sister Ellen Riojas Clark (Hector Clark), nieces Judy Clark and Jennifer McDonnell (Jeff McDonnell), and great nieces Erica Salazar (Eric Younge), Melony Davis, Madeline McDonnell, and Emily McDonnell. She was preceded in death by her husband Samuel Solis, her parents Antonio and Magdalena Riojas, and her brothers José Riojas and David Riojas. Memorial contributions can be made in Ms. Solis' name to Bilingual Education Student Organization at Texas State University or Texas Parents as Teachers Organization. The Solis family would like to extend heartfelt thanks to everyone at The Blake at Lafayette for providing a safe and happy environment during her last years View the obituary and guestbook online at www.mourning.com Martin & Castille-DOWNTOWN, 330 ST. Landry Street Lafayette, LA. 70506 337-234-2311

The family of Delia Toni Riojas Solis created this Life Tributes page to make it easy to share your memories.

Send flowers to the Solis family.