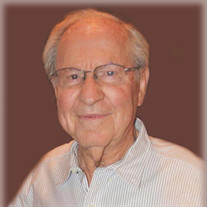 A Mass of Christian Burial for Donald "Don" James Breaux, 85, of Lafayette, Louisiana, will be held on Thursday, March 11, 2021, at 3pm in St. Mary, Mother of the Church. The Rev. Msgr. Keith DeRouen will serve as Celebrant of Mass with the Rev. Msgr. Charles Dubois and Rev. Cedric Sonnier as Con-Celebrants. A visitation will be held at 1:15 p.m. prior to the Funeral Mass at the Church with a Rosary being prayed by Brady LeBlanc at 2:15 pm. followed by a Eulogy by Dana Durman. Leslie Hanks and Nicole Chism will serve as Lectors and the Giftbearers will be Peyton Pellerin and Anna Breaux. Jodi Bollich, Dave Domingue and Hailey H. Stevenson will sing for the Funeral Mass "Pie Jesu". "Psalm 23", "Ave Maria", "Panis Angelicus" and "Battle Hymn of the Republic" accompanied on the organ by Deborah Duhon and on the violin by Lauren Baker. The Breaux Family asks that Covid-19 mask mandate and social distancing be observed. A private family entombment will be held at St. John’s Cathedral Cemetery Mausoleum. Grandon, as his family affectionately knew him, passed away peacefully at his home on Monday, March 8, 2021. His life was characterized by his passion for his profession, a love for his Catholic faith, his family, and his friends. He was born February 18, 1936, in Crowley to Ellis and Alita Thibodeaux Breaux and attended St. Michael’s High School. He earned a Master's Degree from Tulane University and later established an architectural firm in Lafayette. Hundreds of churches, schools, houses and public buildings stand throughout Louisiana and Texas as his creative legacy. Don was a charter member and Eucharistic minister of St. Mary, Mother of the Church and was a member of the Equestrian Order of the Holy Sepulchre, the Serra Club and the Carmelite Guild. He served as past president of the Southwest Louisiana Mardi Gras Association, and was a past member of the Krewe of Gabriel, and the American Institute of Architects. Professionally, he garnered many local, regional and state awards, including Red Lerille's Health Club, the restoration of the Grand Opera House in Crowley, Knight Oil Tools Corporate Headquarters and the Ford Building Restoration. He is survived by his loving family including his wife of 57 years, Donna Baronet Breaux; children, Dana Durman (Brian) of Tyler, Texas, Leslie Hanks (Chad) and Nicole Chism (Cliff) of Lafayette and Chris Breaux (Laura) of Allen, Texas; grandchildren Hailey H. Stevenson(William) Patrick Durman, Heidey H. Hornsby(Keith), Peyton Pellerin, Brandon Durman and Anna Breaux; great grandchildren, William “Liam” and Landon Stevenson and many nieces and nephews. Don was preceded in death by his parents, his sisters, Belle Gow and Rita Foreman and a brother, Ellis Breaux, Jr. Pallbearers will be Brian Durman, Chad Hanks, Cliff Chism, Patrick Durman, Brandon Durman and William Stevenson. The family wishes to sincerely thank NSI Hospice for the wonderful care and support given. It was Don’s wishes, in lieu of flowers, that donations may be made to the Carmelite Monastery, 1250 Carmel Drive, Lafayette, Louisiana 70501. View the obituary and guestbook online at www.mourning.com Martin & Castille-DOWNTOWN-330 St. Landry St., Lafayette, LA 70506, 337-234-2311

A Mass of Christian Burial for Donald "Don" James Breaux, 85, of Lafayette, Louisiana, will be held on Thursday, March 11, 2021, at 3pm in St. Mary, Mother of the Church. The Rev. Msgr. Keith DeRouen will serve as Celebrant of Mass with the... View Obituary & Service Information

The family of Donald "Don" James Breaux created this Life Tributes page to make it easy to share your memories.

A Mass of Christian Burial for Donald &quot;Don&quot; James Breaux, 85,...

Send flowers to the Breaux family.