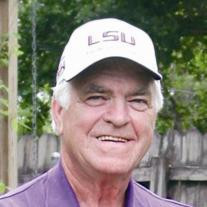 Funeral services will be held on Tuesday, May 1, 2012 at a 10:00 AM Mass of Christian Burial at Holy Cross Catholic Church in Lafayette, for Donald Long, age 76. Interment will be in Lafayette Memorial Park Cemetery. Mr. Long's Grandson, Reverend Nathan Long, Secretary - Ministry of Christian Formation in Lake Charles, Louisiana, will be the Celebrant of the Funeral Mass and will conduct the funeral services. Giftbearers are Scott Long and Paula Harwin. Lector is Nicole Foreman. Vocalist, Darlene Arnaud, niece of Mr. Long, will sing, "Here I Am, Lord", "Amazing Grace", "Eye Has Not Seen", "On Eagles' Wings", and "How Great Thou Art". Donald Long was known by friends far and wide as “Dandy Don” -- a truly passionate fan of Louisiana State University sports and a leading voice of the Tiger Nation. Don met the love of his life, Joy, some 55 years ago. They quickly married and remained a loving couple until her death in July, 2010. Together they raised five children, Kenneth Paul Long of Lake Charles (married to Marjorie Landry Long), Karen K. Long of Baton Rouge (married to Ted Chapman), Daniel Thomas Long of Arlington, Texas (married to Joyce Blackburn Long), Paula Long Harwin of Lafayette (married to Anthony Harwin), and Scott Allen Long of Youngsville (married to Heather Roths Long); thirteen grandchildren, Father Nathan Long, Nicole Long Foreman (married to Brad Foreman), John Gibby, Jr., Christina Gibby (engaged to Michael Springer), Matthew Long, Grayson Long, Lindsay Joy Harwin, Regan Harwin, Julianne Harwin, Gabrielle Harwin, Valerie Long, Amelia Long and Bethany Long, and seven great grandchildren, Kaleb Foreman, Andrew Foreman, Isabella Foreman, Philip Foreman, Nicholas Foreman (expected on June 8), Lilla Coffey and Prestin Springer. Don is survived by four brothers - retired Representative Jimmy Long of Natchitoches, Dr. Bill Long of Shreveport, Carroll Long of Longview (TX), and Senator Gerald Long of Natchitoches. Donald Smith Long, born December 17, 1935, peacefully ended his long fight against colon cancer on Saturday, April 28, 2012 surrounded by loved ones. He was born in the rural town of Tannehill, Louisiana, raised in the Winnfield area and was a resident of Lafayette for 51 years. He lived a life in service to others. He believed in God, his country, in simple pleasures and the value of family and friends. As often as possible he spent time fishing, working in the garden, tossing a ball with his grandkids, or just enjoying a cup of coffee with close friends. Don had a blue-collar work ethic and valued good customer service. These values were evident throughout his career as a meat cutter and market manager and then as a federally-certified inspector for the state of Louisiana in the meat and seafood industries. One of his passions was to watch young kids grow and develop as competitive athletes. He served as baseball coach to many Little Leaguers, and he constantly encouraged athletes of any sport to do well in school, train better and develop as an athlete that enjoys the game and exemplifies good sportsmanship. Don officiated high school football games across the state of Louisiana. It was an honor for Don to be the voice of DandyDon.com, since he and his son, Scott, founded the daily blog on LSU sports in 1996. At that time he devoted himself to bringing daily messages to the Tiger community, though he had been an LSU fan for decades prior. For some thirty years, until the time came for him to care daily for Joy in her fight against Parkinson’s Disease, he hadn’t missed a game in Tiger Stadium. He also loved attending games at Alex Box and the Maravich Center. He was preceded in death by his loving wife of 53 years, Joy Ardoin Long, his father, Ruben Ray Long, his mother, Ruby Smith Long and three brothers - James Wade Long, Colvin Ray “Cotton” Long, and Thomas Henry Long - all from Winnfield. Pallbearers will be Kenneth Long, Daniel Long, Scott Long, John Gibby, Jr., Matthew Long and Anthony Harwin. The family requests that visitation be observed in Martin & Castille's SOUTHSIDE location on Monday from 3:00 PM to 8:00 PM and Tuesday from 8:00 AM until time of service. A Rosary will be prayed Monday, April 30, 2012 at 7:00 PM by Chaplain Lou Labbe with Hospice of Acadiana in Martin & Castille Funeral Home. The family would like to extend their sincere appreciation to Hospice of Acadiana for their kind, loving care during a difficult time. www.hospiceacadiana.com View the obituary and guestbook online at www.mourning.com Martin & Castille-SOUTHSIDE-600 E. Farrel Rd., Lafayette, LA 70508, 337-984-2811

Funeral services will be held on Tuesday, May 1, 2012 at a 10:00 AM Mass of Christian Burial at Holy Cross Catholic Church in Lafayette, for Donald Long, age 76. Interment will be in Lafayette Memorial Park Cemetery. Mr. Long's Grandson, Reverend... View Obituary & Service Information

The family of Donald Long created this Life Tributes page to make it easy to share your memories.

Send flowers to the Long family.