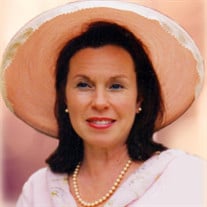 Funeral services will be held on Wednesday, December 2, 2020, at a 10:00 AM Mass of Christian Burial in the Cathedral of St. John the Evangelist Catholic Church in Lafayette, for Donna Randazzo Robinson, 64, who passed away Thursday afternoon, November 26, 2020 at Lafayette General Medical Center. The family requests that visitation be observed in Martin & Castille's DOWNTOWN location on Tuesday from 4:00 until 7:00 PM and on Wednesday from 8:00 AM until time of service. A Rosary will be prayed by Brady LeBlanc on Tuesday at 6:30 PM in Martin & Castille Funeral Home. Interment will be in St. John Cemetery. Reverend Monsignor Keith J. DeRouen, Pastor of Our Lady Queen of Angels Catholic Church in Opelousas, will serve as Celebrant and conduct the funeral services. Lectors will be Camille Autin and Nanette Cook. Giftbearers will be her three sons. Karen Broussard and Dave Domingue, vocalists, accompanied on the organ by Tom Niel and on the violin by Lauren Baker, will sing "Here I Am, Lord", "Psalm 23", "Ave Maria", "Pie Jesu" and "On Eagles' Wings". Larry Bossier, Bagpiper, will play "Abide With Me", "Going Home" and "Amazing Grace". For family members and friends who are unable to attend on December 2, 2020 at 10:00 AM, the service will be live-streamed to a Memorial Facebook Group dedicated to Donna Randazzo Robinson. To join the group, click the link below and then "join group". The video will appear on this group at service time, 10:00 AM. You may also share memories, pictures and condolences to the family in this group. Facebook link: www.facebook.com/groups/Donnarrobinson/ Cherishing Donna's memory include her beloved husband, Albert Nelson Robinson III; her three sons, Captain Albert Nelson Robinson IV, USMC and his wife, Kelly Courville Robinson, Alexander Bartlett Robinson, Sr. and his wife, Mary Escott Robinson, Ansley Collin Robinson, Sr., and his wife, Layne Whitcomb Andrus Robinson; and six grandchildren, Jackson Taylor Robinson, Albert Nelson Robinson, V, Beau Hayes Robinson, Alexander Bartlett Robinson, Jr., Vivian Mae Robinson and Ansley Collin Robinson, Jr.; and one brother, Frank Joseph Randazzo, II. She was preceded in death by her parents, Tony Joseph Randazzo and Maisel Marie Patin Randazzo. Donna Randazzo Robinson grew up in St. Martinville and resided in Lafayette for the majority of her life. She was a loving and devoted wife, a caring daughter and sister, and an extremely proud mother of her three sons and six grandchildren. She was a graduate of Our Lady of Mercy High School in St. Martinville, and the proud bearer of the title “Miss Saint Martin 1975”. She attended USL, where she was an active member of Kappa Delta Sorority. For those that knew her, Donna was an outgoing, jovial, and genuine person. She loved music, dancing, and especially laughing. She was a remarkable cook, and often and enthusiastically prepared home-cooked meals for any occasion. Donna was also a phenomenal poet. She ardently wrote poems for the ones she loved. Most importantly, she proudly loved her sons and grandchildren. In all, her unforgettable personality left a lasting impression with any person she met. Pallbearers will be Ryan Joseph Randazzo, Frank Joseph Randazzo, III, Jackson Taylor Robinson, Robert Louis Autin, M.D., Richard Hayes Green, Raymond Edward Martin, III and James Austin Martin. Honorary Pallbearer will be Frank Joseph Randazzo, II. Memorial contributions can be made in Donna Randazzo Robinson's name to the Carmelite Monastery, 1250 Carmel Avenue, Lafayette, LA 70501. A heartfelt appreciation is extended by the Robinson family to Cheryl Breaux who has been a lifelong friend and caretaker. View the obituary and guestbook online at www.mourning.com Martin & Castille-DOWNTOWN-330 St. Landry St., Lafayette, LA 70506, 337-234-2311

Funeral services will be held on Wednesday, December 2, 2020, at a 10:00 AM Mass of Christian Burial in the Cathedral of St. John the Evangelist Catholic Church in Lafayette, for Donna Randazzo Robinson, 64, who passed away Thursday afternoon,... View Obituary & Service Information

The family of Donna Randazzo Robinson created this Life Tributes page to make it easy to share your memories.

Send flowers to the Robinson family.