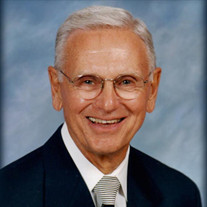 A Mass of Christian Burial will be held on Saturday, February 19, 2022 at 11:00 AM in the Cathedral of St. John the Evangelist for Douglas Elias Ashy, Sr., 91, who passed away peacefully on Monday, February 14, 2022 at Our Lady of Lourdes Regional... View Obituary & Service Information

The family of Douglas Elias Ashy, Sr. created this Life Tributes page to make it easy to share your memories.

A Mass of Christian Burial will be held on Saturday, February...