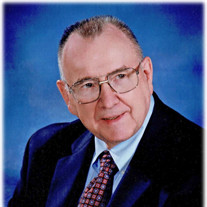 Funeral services will be held Tuesday, March 2, 2021, at a 10:00 AM Mass of Christian Burial in St. Mary, Mother of the Church, Catholic Church for Mr. Douglas Dean Duhon, age 85, who passed away on February 24, 2021 at his residence in Lafayette. Rev. Cedric Sonnier, Pastor, will be the Celebrant of the Funeral Mass and will conduct the services. Lectors will be Sue Caswell and Jackie Hodges and the Giftbearers will be Tanya Smith, Judy Perrault and Rose Manceaux. Dave Domingue, vocalist, accompanied on the organ by Deborah Duhon, trumpet by Will Green and violin by Lauren Baker, will sing for the Funeral Mass "Here I Am, Lord", "Psalm 23", "Ave Maria", "On Eagles' Wings" and "Battle Hymn of the Republic". Interment will be in the Istre Cemetery in Mermentau Cove, La. Committal services will be conducted by Rev. Randy Moreau, Pastor of St. John the Evangelist in Mermentau, LA. Survivors include his sister, Emily Claire Duhon, his brother, Alden Duhon (Jane), nieces Jackie Hodges (Steve), Tanya Smith, nephews Jim Thibodeaux, Damon Smith (Tricia), Tim Smith, Shannon Duhon (Christa) and Dr. Jace Duhon and one great niece Elizabeth Smith. He was preceded in death by his parents, Peterson Duhon and Adeline Cary Duhon; and one sister, Sylvia Duhon Smith. A native of Mermentau, LA, Mr. Duhon received his Bachelor of Science Degree in Mechanical Engineering from LSU in 1958 and his Master of Science Degree in Aeronautics from CalTech in 1960. He worked for McDonnell Douglas for thirty-two years, beginning his career on the West Coast with Douglas Aircraft's Missiles and Space division in Santa Monica. He went to Houston, TX in 1974 working in OMS/RCS performing propulsives consumables analysis and worked in various missile and space programs, including the space shuttle and space station. Mr. Duhon retired in 1992 and moved to Lafayette to be near family. He was a member of the Society of Air Racing Historians, the Aircraft Engine Historical Society, the Reno Air Racing Association and the Circus Fans Association. Pallbearers will be Damon Smith, Tim Smith, Steve Hodges, Robert Winkler, Jim Thompson, and Jim Thibodeaux. A heartfelt appreciation is extended to Dr. Ken McCarron for his many years of caring for Douglas. The family would also like to give thanks to the staffs of Hospice of Acadiana, Concepts of Care, Home Instead, as well as faithful caregivers Lou Comeaux, Ann Patin, Jason Broussard, Demi Comeaux and Patricia Almanza. Visitation will be held in St. Mary, Mother of the Church, Catholic Church, 419 Doucet Road, Lafayette, LA on Tuesday from 9:00 AM until time of the Funeral Mass. A Rosary will be prayed by Marilyn Lewis at 9:30 AM. In lieu of flowers, memorial contributions in Mr. Duhon’s name may be made to Hospice of Acadiana. 2600 Johnston St. Lafayette, La 70503-3240; 337-232-1234 Obituary and guest book may be viewed online at www.mourning.com. Martin & Castille-DOWNTOWN-330 St. Landry St., Lafayette, LA 70506, 337-234-2311

Funeral services will be held Tuesday, March 2, 2021, at a 10:00 AM Mass of Christian Burial in St. Mary, Mother of the Church, Catholic Church for Mr. Douglas Dean Duhon, age 85, who passed away on February 24, 2021 at his residence in Lafayette. Rev.... View Obituary & Service Information

The family of Douglas Dean Duhon created this Life Tributes page to make it easy to share your memories.