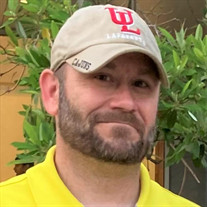 Funeral services will be held on Saturday, April 2, 2022 at 2:00 PM in Martin & Castille Funeral Home's SCOTT location for Edward "Joey", Milligan, III, age 46, who passed away on Monday, March 28, 2022 in Lafayette. The family will receive guests at the funeral home on Saturday from 9:00 AM until the time of the service. Inurnment will be in Sts. Peter & Paul Mausoleum at a later date. Pastor Marty DeRoussel with Our Savior's Church Midtown will conduct the funeral services. Survivors include his wife, Marcie Schmidt Milligan; his children, Ahna Milligan, Evan Milligan and Alexander Schmidt; his mother, Denise Dupuis Milligan; his sister, Deneé Milligan Simon; his brother, Brandon Case Milligan; his mother-in-law, Cynthia Swilley Segura; his father-in-law, Mark Schmidt; his niece, Brookelyn Simon; his nephew, Austin Simon; and his Godmother, Lisa Ward. He was preceded in death by his father, Edward Joseph Milligan, Jr.; his maternal grandparents, Victor Louis Dupuis and Dora June Dupuis; his paternal grandparents, Edward Joseph Milligan, Sr. and Ann Leger Milligan; and his Godfather, Rickey Soileau. Joey was born and raised in Lafayette, La. He graduated from Acadiana High School in 1994 and went on to further his education in Culinary Arts. He worked as a Chef and enjoyed cooking for others when he found the time. Many knew Joey as “DJ Smurf”. He had a passion for music and enjoyed playing music for others. He was a huge Star Wars fan and had a collection he treasured. He had an infectious smile and big heart. He was always willing to help others in anyway he could. Joey had recently given his life to Christ after many years of prayer from his family and friends. He enjoyed reading his bible and his faith continued to grow each day. Many friends will remember him for his bubbly, energetic spirit that always seemed to make you laugh. He loved his family and will forever be remembered in our hearts. Memorial contributions can be made in Edward "Joey" Milligan's name to Our Savior's Church Midtown, c/o The Retreat at Sunset, 101 Marie Antoinette Street, Lafayette, LA 70506. A heartfelt appreciation is extended by the Milligan family to Our Savior's Church, especially Devon Brown. View the obituary and guestbook online at www.mourning.com Martin & Castille-SCOTT-802 Alfred Street, Scott, Louisiana, 70583, 337-234-2320.

Funeral services will be held on Saturday, April 2, 2022 at 2:00 PM in Martin & Castille Funeral Home's SCOTT location for Edward "Joey", Milligan, III, age 46, who passed away on Monday, March 28, 2022 in Lafayette. The family will receive... View Obituary & Service Information

The family of Edward "Joey" Milligan, III created this Life Tributes page to make it easy to share your memories.