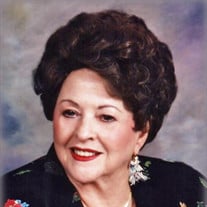 Mrs. Elia Maria Magdalena Gines Baudoin passed away peacefully in Lafayette on October 21, 2020. Elia was born on July 22, 1927 in Cardenas, Cuba. She met the love of her life, Freddy F. Baudoin of Youngsville, Louisiana, while he was working for Gulf Oil in Cuba. After they were married, they moved to the United States. She loved her new country and was very proud to become an American citizen. Freddy and Elia lived all over the world as Freddy followed his civil engineering career. They were able to visit Elia’s family in Cuba often, but once Castro took power on January 1, 1959, she never returned. After Freddy retired from Gulf Oil Company in 1969, they moved to Lafayette. Elia was a member of St. Mary's Catholic Church and was a devout Catholic. She was also an active member of The New Acadians Women's Club. She was blessed with wonderful friendships which she cherished. She is survived by her daughter, Yvonne, and son-in-law James McArthur of Wilmington, NC and her son, Mark, and daughter-in-law Cathy Wood Baudoin of Katy, TX. She was a loving grandmother to four grandsons, Eric Baudoin of Maryland, Frederick Baudoin and Nicholas Baudoin of Texas, Ryan McArthur of Massachusetts, and one granddaughter, Heather McArthur Hamilton of North Carolina. She was fortunate to love and spoil four great-grandchildren, Shane and Ella Hamilton of North Carolina, and Luke and Leia Baudoin of Maryland. She is also survived by many nieces and nephews on both sides of the Gines and Baudoin families. Elia was preceded in death by Freddy in 1992. The family is grateful to Cornerstone at the Ranch and Hospice of Acadiana for their loving care over the past few months. Donations may be made in Elia's name to the charity of your choice. We will ask you to join us in celebrating her life at a later date, when travel and fellowship are less restricted. Interment will be held at Lafayette Memorial Park following the services. View the obituary and guestbook online at www.mourning.com Martin & Castille-SOUTHSIDE-600 E. Farrel Rd., Lafayette, LA 70508, 337-984-2811

Mrs. Elia Maria Magdalena Gines Baudoin passed away peacefully in Lafayette on October 21, 2020. Elia was born on July 22, 1927 in Cardenas, Cuba. She met the love of her life, Freddy F. Baudoin of Youngsville, Louisiana, while he was working... View Obituary & Service Information

The family of Elia Madeline Baudoin created this Life Tributes page to make it easy to share your memories.

Send flowers to the Baudoin family.