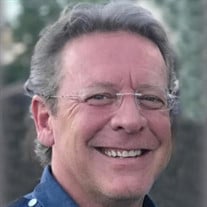 A Catholic Funeral Service will be held for Mr. Eric Thomas Faulk at 11:00 AM on Saturday, October 31, 2020 in La Chapelle de Martin & Castille, DOWNTOWN location. Mr. Eric was 54 when he passed away on Monday, October 26, 2020 in Lafayette, Louisiana. Reverend Andrew Schumacher, Parochial Vicar of The Cathedral of St. John the Evangelist in Lafayette will conduct the funeral services. Entombment will be in Calvary Cemetery Mausoleum. The family requests that visitation be observed in Martin & Castille's DOWNTOWN location on Friday, October 30, 2020 from 5:00 PM to 9:00 PM and will resume on Saturday, October 31, 2020 from 8:00 AM until time of service at 11:00 AM. A Rosary will be prayed Friday evening at 7:00 PM in Martin & Castille Funeral Home. Survivors include his son, Austin Faulk and spouse, Sam Carrell; his daughter, Chloë Faulk; his son, Nicholas Faulk; his mother, Olivia Virginia Chauvin; his brother, Emmet Faulk, Jr. and his wife, Renée; his sister, Andrée Faulk Gerami; his loving girlfriend, Cherie Broussard; his god-child, Sarah Gerami; his nephews, Jeremy Faulk and Andrew Faulk; his nieces, Alexis Stephan and Rebecca Gerami. He was preceded in death by his father Emmet Faulk, Sr. Eric Thomas Faulk was born in Houma, Louisiana in 1966 and moved to Lafayette, Louisiana in 1982 where he graduated from Lafayette High School and University of Southwestern Louisiana. Throughout and following his college career, Eric worked in the restaurant industry where he established himself as a friend among many. After many years, he moved into pharmaceutical sales where his career excelled in excess of 20 years. Throughout life’s many seasons, Eric maintained an intense passion for music. He was a talented drummer in numerous bands, and his family often found him playing in his garage for hours on end. Though his love of music was immense, he loved his children - Austin, Chloë, and Nicholas - above all. He was so proud of them, and he was always eager to talk about his love for them to anyone who would listen. Being their father was his greatest accomplishment. Eric had a passion for life, and everyone he met felt drawn to his electric energy. He was an incredible brother, son, father, and friend to everyone he met. He will be missed beyond words. Pallbearers will be Kevin Faulk, Kyle Faulk, Andre Arceneaux, Lee Sonnier, Bryan Blum and Don Holbert. View the obituary and guestbook online at www.mourning.com Martin & Castille-DOWNTOWN-330 St. Landry St., Lafayette, LA 70506, 337-234-2311

A Catholic Funeral Service will be held for Mr. Eric Thomas Faulk at 11:00 AM on Saturday, October 31, 2020 in La Chapelle de Martin & Castille, DOWNTOWN location. Mr. Eric was 54 when he passed away on Monday, October 26, 2020 in Lafayette,... View Obituary & Service Information

The family of Eric Thomas Faulk created this Life Tributes page to make it easy to share your memories.

A Catholic Funeral Service will be held for Mr. Eric Thomas Faulk...

Send flowers to the Faulk family.