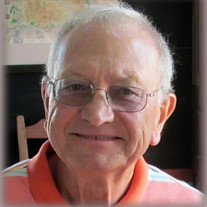 Funeral services will be held on Saturday, October 17, 2020, at 2:00 PM in La Chapelle de Martin & Castille in Lafayette, for Eugene Leon Eleazar, Jr., 76, who died Tuesday morning, October 13, 2020 at Lafayette General Medical Center. The family requests that visitation be observed in Martin & Castille's DOWNTOWN location on Saturday from 1:00 PM until time of the service. Interment will be in Lafayette Memorial Park Cemetery. Pastor Brandon Bernard of Westminster Presbyterian Church in Baton Rouge, will conduct the funeral services. Survivors include his wife of 40 years, Susan Ottarson Eleazar; his children, Carrie-Anne Slaton and her husband Ryan, Bryan Lentjes and his wife Crystal, and Anna Colosimo-Gillogly and her husband Mike; his grandchildren, Alex Lentjes, Gray Lentjes, Nicholas Colosimo, and Ava Colosimo; his sister, Yvette Hebert; his nieces, Leslie Contreras and Renee' Hebert; and his nephew, Brian Hebert. Gene was preceded in death by his parents, Dr. Eugene L. Eleazar, Sr. and Mabel Brignac Eleazar. He was a long time member of St Mary’s Catholic Church and served as a Eucharistic minister. Gene earned his Pharmaceutical degree in 1969 and maintained his Pharmacy License for the past 50 years. He found his career passion in pharmaceutical sales where he was well known and regarded by all the local doctors. Known by many for his kindness and generosity, Gene was persistently thoughtful of others. He also had an enduring enjoyment of golf, playing the game into his 70’s. Pallbearers will be Bryan Lentjes, Nicholas Colosimo, Ryan Slaton, Mike Gillogly, Joe Hebert and Brian Hebert. Memorial contributions can be made in Eugene Eleazar's name to the charity of your choice. A heartfelt appreciation is extended by the Eleazar family to Dr. Lyons and Right at Home Senior Care for their compassionate support. View the obituary and guestbook online at www.mourning.com Martin & Castille-DOWNTOWN-330 St. Landry St., Lafayette, LA 70506, 337-234-2311

The family of Eugene Leon Eleazar, Jr. created this Life Tributes page to make it easy to share your memories.