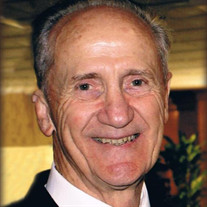 Funeral services will be held on Friday, February 4, 2022, at a 2:00 pm Mass of Christian Burial in St. Patrick Catholic Church in Lafayette, for Francis Alcée Bourgeois, 89, who passed away on Tuesday, February 1, 2022, at his residence in Lafayette surrounded by his family. The family requests that visitation be observed in Martin & Castille's SOUTHSIDE location on Friday, February 4, from 10:00 am until time of services. A Rosary will be prayed on Friday morning at 11:30 am in Martin & Castille Funeral Home. Interment will be in Lafayette Memorial Park Cemetery. Reverend Joshua Guillory, Pastor of St. Patrick Catholic Church in Lafayette, will conduct the funeral services. Survivors include his beloved wife of 64 years, Jacqueline Cross Bourgeois; his children, Janelle B. Pierret and her husband, Matthew, Lori A. Bourgeois, Dione B. Sonnier and her husband, Michael, and John A. Bourgeois and his wife, Susan; his four grandchildren, Rebecca R. Pierret, Rachel C. Pierret, Taylor R. Law and her husband, Brandon, and Darion M. Sonnier; two brothers, Raymond R. Bourgeois and his wife, Nancy, Leo B. Bourgeois and his wife, Diane; a nephew, Emmanuel A. “Boozy” Bourgeois, Jr. and his wife, Pat; and numerous other relatives and friends. He was preceded in death by his parents, Edmond Simon Bourgeois and the former Melanie Azelle “Ethel” Young; an infant son, Joel Francis Bourgeois; a son-in-law, Russell Harvey; three brothers, Emmanuel A. Bourgeois, Sr. and his wife, Claire, Joseph E. Bourgeois, and Anthony C. Bourgeois; and four sisters, Ethel Eve Freemin and her husband, Russell, Doris T. DeAngelis and her husband, James, Mary Rita Booth and her husband, Otto, and Lucille E. Pollok and her husband, Paul. Mr. Bourgeois was a native of Covington and a longtime resident of Lafayette. He attended school at St. Paul’s College in Covington and received his bachelor’s degree in Social Studies from Southeastern Louisiana College in Hammond. Mr. Bourgeois proudly served his country in the United States Army as a Staff Sergeant during the Korean War, operating in an artillery unit stationed in Kumwha Valley, Korea. After graduating college, Francis began working for the Social Security Administration, starting as a claims representative working up to become the Assistant District Manager in Lafayette, retiring after 38 years of service with over 40 years of federal service combined. He was affectionately known to coworkers and colleagues as FAB (sourced from his initials), as Papa Frank to his granddaughters and family, and Coach Frank to numerous young athletes. He enjoyed sports of all kinds particularly golf, Saints football, and soccer, having played both football and baseball in high school. He participated in a variety of sports with the Senior Olympics, especially softball and pickleball, making it to nationals in softball with the Louisiana State Team. Other hobbies included square dancing with his wife, Jacqueline, as well as writing short stories and poems from his life and childhood. Mr. Bourgeois never met a stranger, had a love for life and his family and enjoyed making others laugh and smile. His faith was strong, as a devout Catholic he was a parishioner of St. Pius X Catholic Church and later St. Patrick Catholic Church both in Lafayette. He was a Lector and Extraordinary Minister of the Eucharist with St. Pius X Church as well as a member of the Knights of Columbus Council #8901. He participated in the Catholic Cursillo at the Prairie Ronde Cursillo Center, number 11, one of the early members to attend. Pallbearers will be Michael D. Sonnier, Matthew C. Pierret, Bill May, Eric P. Bacquet, Brandon Law, and Allen Bonnet Honorary Pallbearers will be Emmanuel "Boozy" Bourgeois, Leo B. Bourgeois, Raymond Bourgeois, and John L. Love. Memorial contributions can be made in memory of Mr. Francis Alcée Bourgeois to the Knights of Columbus, Council #8901 of St. Pius X Catholic Church, [email protected] 337-332-1495, P.O. Box 80489 Lafayette, Louisiana 70598; or to The Alzheimer’s Research Foundation, online at www.alzheimersresearchfoundation.com/make-a-donation or by mail, 620 Sea Island Road, Suite 324 St. Simons Island, GA 31522. A heartfelt appreciation is extended by the Bourgeois family to all family and friends who have kept Francis in their prayers; all of his dedicated caregivers; and the compassionate staff at Acadian Hospice. View the obituary and guestbook online at www.mourning.com Martin & Castille-SOUTHSIDE-600 E. Farrel Rd., Lafayette, LA 70508, 337-984-2811

Funeral services will be held on Friday, February 4, 2022, at a 2:00 pm Mass of Christian Burial in St. Patrick Catholic Church in Lafayette, for Francis Alcée Bourgeois, 89, who passed away on Tuesday, February 1, 2022, at his residence in... View Obituary & Service Information

The family of Francis Alcée Bourgeois created this Life Tributes page to make it easy to share your memories.