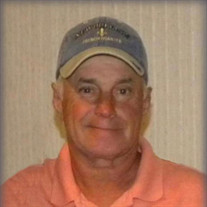 Funeral services will be held on Monday, May 24, 2021 at 11:00 AM at La Chapelle de Martin & Castille in Lafayette for Francis "Drake" Talbot, Sr., 67, who passed away on Sunday, May 16, 2021 at Sage Specialty Hospital in Lafayette. The family requests that visitation be observed in Martin & Castille's DOWNTOWN location on Sunday from 3:00 PM to 10:00 PM and will continue on Monday from 8:00 AM until time of services. A Rosary will be prayed on Sunday at 6:00 PM in Martin & Castille Funeral Home. Interment will be in Calvary Cemetery. Reverend Eugene R. Tremie, Nativity of Our Lady Catholic Church in New Iberia, will conduct the funeral services. Survivors include his children, Francis "Drake" Talbot, Jr., Derrick Talbot and wife, Brooke, and Tina Talbot; his siblings, Sheila Guidry, Dennis Talbot, Duke Talbot and wife, Cheryl, Dyke Talbot and wife, Anne, and Shannon Emmer and husband, Mike; his grandchildren, Dane Morgan, Dirk Talbot, Dustin Talbot, Dylan Talbot, Stefen Clement, Shelby Clement, Kailey Fontenot, Seth Fontenot, Kira Guidry, Shirley Guidry, and Anita Courville; his great-grandchildren, Lilly Fontenot, Brecken Cagle, Dagen Morgan, and Xandar Morgan. He was preceded in death by his parents, Leroy Talbot and Dorothy Nezat Talbot; his nephew, William Talbot. Drake was part of a really close family. He and his siblings shared a special bond, especially his brothers. They looked after each other no matter what the circumstances were. Drake began his career in the oil field with Frank's Casing. From there, he moved on to a few different companies. He was a welder by trade and soon ventured off on his own to put his skills to use. He was blessed with many gifts in life. He could come up with many ideas in his mind and follow through and make them work. He had the gift of gab and could strike up a conversation with anyone about anything. Next thing you knew, he was putting one of his ideas together for a total stranger. He loved to cook, it was a true passion of his. If you knew you were going somewhere and Drake was cooking, you knew you were going to eat something you couldn't get enough of. Another joy of his was creating new recipes and making his own seasoning. Deer hunting is what he loved most, although the past few years he was not able to do much of it. He loved just going to the camp with his brothers, even if it was just to cook. Drake was very special to a lot of people. Once you let him into your life, you were his dear friend. There was something about him that was very unique. He always had good intentions even if they were not good in someone else's eye. You could never be mad at him for long. He was one of those special people that you just had to love. There are many things the people who knew Drake will remember him by, but to his family and the ones who followed him on his journey in life, he will be remembered as a fighter. One who's determination was unmatched. He fought a battle the last 3-4 years that most people would not last a month. Drake gave a new meaning to "the cat with nine lives". It was time for him to be called up to Heaven to meet his mother and father. God needed a creative mind and character up there and now he has him. Pallbearers will be Drake Talbot, Derrick Talbot, Dyke Talbot, Dennis Talbot, Duke Talbot, and Corey Simoneaux. Honorary Pallbearers will be Mike Emmer, Brandon Emmer, Dylan Talbot, Dirk Talbot, Dustin Talbot, and Seth Fontenot. A heartfelt appreciation is extended by the Talbot family to the staff and doctors of Our Lady of Lourdes Regional Medical Center and Sage Specialty Hospital for their unwavering care to Drake in his time of need. View the obituary and guestbook online at www.mourning.com Martin & Castille-DOWNTOWN-330 St. Landry St., Lafayette, LA 70506, 337-234-2311

Funeral services will be held on Monday, May 24, 2021 at 11:00 AM at La Chapelle de Martin & Castille in Lafayette for Francis "Drake" Talbot, Sr., 67, who passed away on Sunday, May 16, 2021 at Sage Specialty Hospital in Lafayette. The family... View Obituary & Service Information

The family of Francis "Drake" Talbot, Sr. created this Life Tributes page to make it easy to share your memories.