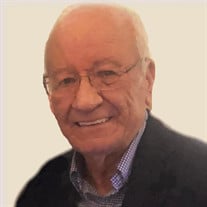 A Mass of Christian Burial will be held on Monday at 2:00 PM, December 14, 2020, at St. Edmond Catholic Church in Lafayette for Mr. Frank Louis Boudreaux, Jr., 80, who died on Monday, December 7, 2020 at Lafayette General Medical Center. Entombment will be in the Cathedral of St. John the Evangelist Mausoleum, Lafayette, Louisiana. Raymond Hebert and Karen Broussard, organist, will sing for the Funeral Mass "On Eagles' Wings", "Psalm 27", "Ave Maria", "One Bread, One Body" and "Be Not Afraid". Reverend Gilbert J. Dutel, will serve as Celebrant of the Mass and conduct the funeral services. Lectors will be Jessica Boudreaux and Courtney Taylor and the Giftbearers will be Stephanie Montesano and Abigail Boudreaux. The Eucharistic Minister will be Amanda Montesano. For family members and friends who are unable to attend on Monday, December 14, 2020 at 2:00 PM, the service will be live-streamed to a Memorial Facebook Group dedicated to Frank Louis Boudreaux, Jr. To join the group, click the link below and then "join group". The video will appear on this group at service time 2:00 PM. You may also share memories, pictures and condolences to the family in this group. Facebook link: www.facebook.com/groups/Franklboudreauxjr/ Survivors include his wife of sixty years, Celeste Hebert Boudreaux; his children, Brett Boudreaux and his wife, Judy, Jennifer Galvez and her husband, Gary, Stacy Montesano and her husband, Bruce, and Scott Boudreaux and his wife, Bronwyn; ten grandchildren, Jessica Boudreaux, Hank Boudreaux, Courtney Taylor and her husband, Cody, Chris Galvez and his wife, Chamaine, Amanda Montesano and her fiance', Ethan Davidson, Stephanie Montesano, Matthew Montesano, Michael Boudreaux, Bradley Boudreaux and Abigail Boudreaux; four great grandchildren, Christian Galvez, Rhett Taylor, Brantley Taylor and William Taylor; and two brothers, Alfred "Fofiet" Boudreaux and his wife, Darleen, and Guy Boudreaux. He was preceded in death by his parents, Frank Louis Boudreaux, Sr. and Leyon Hebert Boudreaux; and one sister-in-law, Cheryl Theriot Boudreaux. Frank was a native of Abbeville and resident of Lafayette, Louisiana for most of his life. During his younger years he excelled in the sport of baseball and played in both little league and Babe Ruth leagues as a pitcher. He made the All Star teams in both leagues. He was on the Speech and Debate team for Mount Carmel in Abbeville and excelled in Extemporaneous Speaking, winning numerous awards and medals. He graduated from Abbeville High School in 1957. At the age of 17 he began his career as a Dispatcher for Milwhite Mud Sales. He continued to work in the oil and gas industry for 45 years and retired in 2002 as President of Newpark Environmental Services. Several years later he was asked to enter the oilfield once again. This time as President of Turbo-Chem International. While he took great pride in his work the thing he loved the most was his family so he decided to retire one last time. He looked forward to being able to spend more time with them because that's when he was the happiest. His grandchildren and great grandchildren were the light of his life. They were involved in numerous activities and Frank and his wife could always be found in attendance. He lived for those moments. Frank was a past member and trustee of the St. Edmond's Parish Council and was instrumental in the building of the new church. He taught CCD classes and was also a Eucharistic Minister. Frank proudly made his Cursillo in the early eighties. Frank was an avid golfer and was a member and past board member of Oakbourne Country Club of Lafayette. He shared his love of golf with his sons and grandsons and enjoyed playing with them every chance he got. Frank had a strong faith in God, he led by example and lived with the belief that if you put God first everything will be okay. Frank and his wife prayed the rosary daily together, watched the daily mass on TV and read in the bible. Each of his family members were asked to write 10 things they loved or admired most about Frank and his wife for an anniversary book they recently presented them with. The common threads from all 24 of them were that God and prayer were a part of his everyday life, he loved them unconditionally and that he was undoubtedly their biggest fan, which are all testaments to the kind of person he was. Frank truly cared about people and will be remembered for his love of God and family, his generosity, his huge heart, his compassion for others, and his humor, which he maintained until the very end. Pallbearers will be Hank Boudreaux, Chris Galvez, Christian Galvez, Matthew Montesano, Michael Boudreaux and Bradley Boudreaux. Honorary Pallbearers will be Alfred "Fofiet" Boudreaux, Guy Boudreaux, Lefty Lafferty, Joe Dupuis, Tony Toniette and Jimmy Gooch. The family requests that visitation be observed in Martin & Castille's DOWNTOWN location on Sunday from 4:00 PM until 7:00 PM and from 11:00 AM Monday until time of service. A Rosary will be prayed Sunday at 6:30 PM in Martin & Castille Funeral Home by his daughter, Stacy Montesano, followed by his grandson, Michael Scott Boudreaux playing "Amazing Grace" on guitar. Memorial contributions can be made in Mr. Frank Louis Boudreaux, Jr.'s name to St. Edmond Catholic Church or St. Vincent de Paul Society, 4131 West Congress Street, Lafayette, Louisiana, 70506. A heartfelt appreciation is extended by the Boudreaux family to Dr. Dwayne Brown and Sarah Breaux Darouse, NP and to Tiffanie Lewis with Agnes's Loving Care for the wonderful care and compassion given to Mr. Boudreaux. View the obituary and guestbook online at www.mourning.com Martin & Castille-DOWNTOWN-330 St. Landry St., Lafayette, LA 70506, 337-234-2311

A Mass of Christian Burial will be held on Monday at 2:00 PM, December 14, 2020, at St. Edmond Catholic Church in Lafayette for Mr. Frank Louis Boudreaux, Jr., 80, who died on Monday, December 7, 2020 at Lafayette General Medical Center.... View Obituary & Service Information

The family of Frank Louis Boudreaux Jr. created this Life Tributes page to make it easy to share your memories.