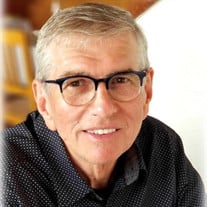 A Celebration of Life service will be held for Mr. Frank D. Powers on Thursday, October 28, 2021 at 3:00 PM at Martin & Castille's La Fleur de Lis Chapel, 600 E. Farrel Rd., Lafayette, La. Frank passed away at the age of 73 on Friday, October 22, 2021 at his residence in Youngsville, with his loving family at his side. The family requests that visitation be observed in Martin & Castille's SOUTHSIDE location, 600 E. Farrel Rd., Lafayette, La on Thursday, October 28, 2021 from 11:00 AM until 3:00 PM. Pastor Linton Broussard of The Bayou Church in Lafayette will conduct the funeral service. Frank was a native of Miamisburg, OH and a current resident of Youngsville, LA. He graduated in the class of 1966 from Miamisburg High School and went on to earn a bachelors degree from Wright State University. Before his retirement, Frank was employed as the COO of American Home Patient in Nashville, TN. Frank was very passionate about traveling, especially to Europe, due to his Irish Heritage. Traveling with his wife Melissa allowed them to connect to people, history and nature; all which helped strengthen their bond for one another. Frank also had an inspiring relationship with books and knowledge that carried throughout his adult life. Frank used music as a tool to be used through difficult times and also celebrations. Studying art and culture were also a very big part of Frank's life of enrichment. Frank was compassionate, gentle, kind and very wise. He was a gentlemen and had a much deeper understanding of life which he never stopped pursuing until his last breath. Frank was a caretaker and wanted to make sure those he loved always felt safe. He will be deeply missed by many and may the memories continue to live through those who knew him. Left behind to cherish his memory is his beloved wife, Melissa Henry Powers; his daughter, Tracy Erin Powers; his son, Ryan Michael Powers; his grandchildren, Emma Bleu Powers and Ella Grae Powers; his nieces, Brittany (Sean) Hopkins and Stacy Brooks Feeney and his nephew, Ryan Brooks. He was preceded in death by his parents, Frank B. Powers and Ida Mae West Powers; his brother, Ronald "Ron" Powers and his son, Blake Alan Powers. View the obituary and guestbook online at www.mourning.com Martin & Castille-SOUTHSIDE-600 E. Farrel Rd., Lafayette, LA 70508, 337-984-2811

The family of Frank D. Powers created this Life Tributes page to make it easy to share your memories.

A Celebration of Life service will be held for Mr. Frank D. Powers...

Send flowers to the Powers family.