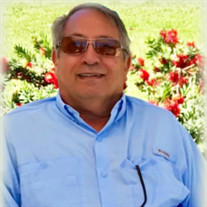 Catholic Funeral services will be held on Friday, March 26, 2021 at 2:00 PM in La Chapelle de Martin & Castille in Lafayette for Gabriel Richard Ackal, Sr., age 67, who died on Wednesday, March 24, 2021 at his residence in Lafayette. Reverend Msgr. Keith J. DeRouen will conduct the funeral services. Survivors include his beloved wife, Lauren Guidry Ackal; his son, Gabriel Richard Ackal, Jr. and his wife, Allison McDade Ackal; his daughter, Victoria Leigh Ackal; two grandchildren, Gabriel Richard Ackal, III and Elizabeth Virginia Ackal; his mother, Mrs. Mae Helen Elias Ackal; his sisters, Pauline Ackal Gerami, Margarette Ackal Moreau and her husband, Alvin C. Moreau, Jr., and Mae Helen Ackal Breaux and her husband, Ulysse "Boo" Breaux; his brother, Michael "Mitch" Antoine Ackal, Jr. and his wife, Sally Rousseau Ackal; his sisters in-law, Mona Guidry Luquette and her husband, David Luquette, Susan Guidry, Lisa Guidry Andrus and her husband, Dwight W. Andrus III and Heidi Guidry Hannie and her husband, Nicol Hannie. He was preceded in death by his father, Michael Antoine Ackal, Sr.; his brother in law, Frank Charles Gerami II and his in-laws, Matt and Vita Comeaux Guidry. Gabe Ackal was born in New Iberia, LA on April 20, 1953. He attended Catholic High School of New Iberia and loved any and all things CHS Panthers. Some of his earliest and closest friends were his fellow Panthers. In 1971, Gabe entered USL, now UL-Lafayette, and joined Kappa Sigma Fraternity where he made new lifelong friends. At that time, he met the former Lauren Guidry and they married in January of 1975. "For forty-six years, we loved, laughed and lived the most wonderful life. God was good to us." To know Gabe was to love Gabe; he was surely an emissary from God. He radiated light, goodness and love. Gabe is new to Heaven, but know that he lived each day by Heavenly Principles. The love and camaraderie Gabe had for his sisters, Margarette, Pauline, Mae Helen, and brother, Mitch, added a dimension to his life that few have. This obituary would not be complete and you would not really know about Gabe without knowing of Gabe's absolute adoration for his two children, Gabriel and Victoria, and the joy he found in them. They were the absolute light of his life. Gabe thought he know joy with his precious Victoria and Gabriel, but, when Gabriel III and Elizabeth were born, he said he now truly realized the goodness of God. Gabe truly made a difference. Pallbearers will be Gabriel R. Ackal, Jr., Michael A. Ackal, Jr., Alvin C. Moreau, Jr, Ulysse "Boo" Breaux, David N. Luquette, Dwight W. Andrus, III, Nicol E. Hannie, John C. Musso, Glenn J. Ashy and John E. Schwing. The family requests that visitation be observed in Martin & Castille's DOWNTOWN location on Friday from 11:00 AM until time of services. Those wishing to make a memorial contribution would do well to follow Gabe's mantra of daily kindness and generosity to those that you come across who are in need. View the obituary and guestbook online at www.mourning.com Martin & Castille-DOWNTOWN-330 St. Landry St., Lafayette, LA 70506, 337-234-2311

Catholic Funeral services will be held on Friday, March 26, 2021 at 2:00 PM in La Chapelle de Martin & Castille in Lafayette for Gabriel Richard Ackal, Sr., age 67, who died on Wednesday, March 24, 2021 at his residence in Lafayette. Reverend... View Obituary & Service Information

The family of Gabriel Richard Ackal, Sr. created this Life Tributes page to make it easy to share your memories.