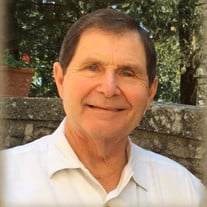 George Lawhon Crain, Jr. was born April 13, 1947 in Shreveport, Louisiana to George and Azalie Crain. At 7 years of age, his family relocated to Lafayette, Louisiana, where he spent most of his life. He died peacefully at his home in the LeBlanc community of Vermilion parish on February 28, 2021, with his wife at his side. After graduating from Lafayette High School, George attended both LSU and Nicholls State University. Following graduation, George served in the finance corps of the US Army stationed in Germany. After his military service, George returned to Lafayette and, at the age of 27, became president of WHC, Inc., a pipeline construction company co-founded by his father. George’s innovations in business led him to initiate a captive insurance group of contractors throughout the United States of which he served as founder and president. Under his leadership, WHC became an industry leader and in 2014 was sold, allowing George to enjoy travel and more time to spend with family and friends. In 1998, George and his wife had moved from Lafayette to Vermilion parish where he enjoyed country life immensely. There they were able to host family and friends, often sharing his ample wine collection and enjoying a good meal! George gave to his community and state through service as a public member of the Louisiana Attorneys Disciplinary Board. He served on the board of directors of the Lafayette Bayou Vermilion District, the Vermilionville Historical Society, the Musket Club, and the Louisiana Contractors Licensing board. He was active in many Mardi Gras activities. He served as a duke for the Krewe of Attakapas, a duke and king of the Order of the Troubadours, and a duke of the Krewe of Gabriel. He was also active for many years in the Chaine des Rotisseurs, an organization dedicated to gastronomy. George was also passionate about hunting and fishing. He spent many daybreaks in duck blinds across South Louisiana with his faithful dogs and good friends. Both his father and son shared that passion and they spent many hours together at their duck camp. He also hunted doves in Argentina with friends, as well as fishing in the gulf and as far as Canada with the BCB Angler’s Club. George developed Multiple Sclerosis, as well as other health issues, but it did not deter his drive and determination to continue living life to the fullest. In later years, as his health declined, although he lost the ability to hunt and fish, his other interests continued unabated. George loved to travel, and he and Merilyn traveled extensively often inviting friends and family to join them on their explorations. His perseverance, courage, and grace, despite his burdens, serve as an example to us all. George is survived by his devoted wife Merilyn Crain, his children Carolyn Broussard (Mark) of Lafayette, Creighton Crain (Lori) of Lafayette, Allison Lagasse (Manard) of Baton Rouge, and Stephen Istre of Portland OR; his grandchildren Camille Lagasse, Matthew Broussard, Emily Broussard, Zackary Crain, and Azalie Crain, as well as his sister Azalie Holland. He was preceded in death by his parents. Visitation will be held from 10:00 AM to 1:00 PM on Thursday, March 4, 2021 at L’Eglise, 3203 J. Alcee Road, Abbeville, LA 70510. A private funeral will be held following visitation with the Rev. Madge McLain officiating. Pallbearers are Creighton Crain, Mark Broussard, Stephen Istre, Manard Lagasse, Dr. Stephen Abshire, Dr. Jim Adams, Edwin Preis, John Chappuis, and Michael McKenzie. Honorary pallbearers include Matthew Broussard, Zackary Crain, Richard Dickerson, Georges Guy, John Toups, Wallace McMakin, Randy Haynie, Don Burts and Allen Roy Ingram. Readers are Pam Romero and R. Douglas Wood, Jr. Due to COVID, masks and social distancing will be required. In lieu of flowers, memorials may be made toward the construction of an accessible playground at Moncus Park. Donations to the Moncus Park Inclusive Playground may be mailed to Moncus Park 2901 Johnston Street, Suite 304 Lafayette LA 70503 or made online at https://give.moncuspark.org/ge/georgecrain View the obituary and guestbook online at www.mourning.com Martin & Castille-SOUTHSIDE-600 E. Farrel Rd., Lafayette, LA 70508, 337-984-2811

George Lawhon Crain, Jr. was born April 13, 1947 in Shreveport, Louisiana to George and Azalie Crain. At 7 years of age, his family relocated to Lafayette, Louisiana, where he spent most of his life. He died peacefully at his home in the LeBlanc... View Obituary & Service Information

The family of George L. Crain, Jr. created this Life Tributes page to make it easy to share your memories.