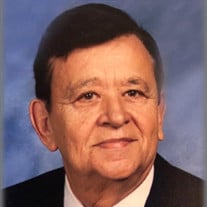 A Mass of Christian Burial will be held on Tuesday, February 1, 2022 at 11:00 AM in Sacred Heart of Jesus Catholic Church in Broussard for Gerald Anthony Moresi , age 88, who passed away on Friday, January 28, 2022 at Avanti Senior Living in Lafayette. Entombment will be in Sacred Heart Mausoleum in Broussard. Reverend Monsignor Jefferson J. DeBlanc, Pastor of Our Lady of Fatima Catholic Church in Lafayette, will conduct the funeral services. Survivors include his sons, Kevin Anthony Moresi and wife Gay, Brian "Jason" Moresi and wife Vickie, Lance Edward Moresi and wife Lori, and Michael Heath Moresi; his grandchildren, Travis Moresi and wife Alyssa, Taylor Moresi and fiancée Kourtlyn Kibodeaux, Courtney Moresi, Heather Pollitt and husband Kyle, Brian "Dylan" Moresi, Brant Jason Moresi, Ana Elizabeth Moresi, Benjamin Reed Moresi, and Samuel Chas Moresi; and his 12 great-grandchildren. He was preceded in death by his beloved wife of 60 years, Mereline Girouard Moresi; his parents, Antoine Joseph Moresi and Juanita Junca Moresi; his brothers, Leroy Moresi, and George Moresi; and his sister, Faye Foreman. A native of Jeanerette, Gerald was a long-time resident of Broussard. Gerald was a graduate of Jeanerette High School. He earned a Bachelor of Arts from Southwestern Louisiana Institute and a Masters of Education from Louisiana State University in Baton Rouge. He taught in Terrebonne and Lafayette parishes. In the late 60's he became the principal of Broussard Elementary until his retirement in 1978. He then opened and operated Moresi Supplies and Equipment, which provided fundraising merchandise and products for schools, for approximately 30 years. Gerald served as coach for LBA's Little League Football teams and for the Broussard track teams. He was president of Broussard Civic Club and was called upon to serve as a volunteer fireman for the City of Broussard. He also served on the Board of Directors for the A. Moresi Company, LTD. He loved to travel, visiting all 50 states with his family in their RV. Gerald loved sports, especially LSU football. He will be deeply missed. Pallbearers will be Kevin Moresi, Jason Moresi, Lance Moresi, Michael Moresi, Travis Moresi, Benjamin Moresi, Dylan Moresi, and Brant Moresi. Honorary Pallbearers will be Taylor Moresi, Samuel Moresi, Steve Patton, David Armentor, and Bobby Chaney. The family requests that visitation be observed in Martin & Castille's SOUTHSIDE location on Monday from 4:00 PM to 8:00 PM and will continue on Tuesday from 8:00 AM until time of services. A Rosary will be prayed on Monday at 7:00 PM by Reverend Monsignor Jefferson J. DeBlanc in the funeral home. Memorial contributions can be made in Gerald Moresi's name to EWTN, ewtn.com A heartfelt appreciation is extended by the Moresi family to the staff of Avanti Senior Living and Hospice of Acadiana. View the obituary and guestbook online at www.mourning.com Martin & Castille-SOUTHSIDE-600 E. Farrel Rd., Lafayette, LA 70508, 337-984-2811

A Mass of Christian Burial will be held on Tuesday, February 1, 2022 at 11:00 AM in Sacred Heart of Jesus Catholic Church in Broussard for Gerald Anthony Moresi , age 88, who passed away on Friday, January 28, 2022 at Avanti Senior Living in... View Obituary & Service Information

The family of Gerald Anthony Moresi created this Life Tributes page to make it easy to share your memories.

A Mass of Christian Burial will be held on Tuesday, February...

Send flowers to the Moresi family.