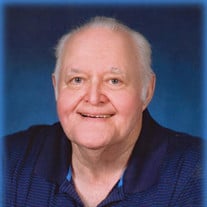 A Mass of Christian Burial will be held for Mr. Gerald James Savoy at 10:00 AM on Monday, November 30, 2020 at Sts. Peter & Paul Catholic Church in Scott. Mr. Gerald was 78 when he passed away on Friday, November 27, 2020 at his residence in Scott surrounded by his family. Entombment will be in Sts. Peter & Paul Mausoleum in Scott. The family requests that visitation be observed in Martin & Castille's SCOTT Location on Sunday, November 29, 2020 from 2:00 PM until 8:00 PM and will resume on Monday November 30, 2020 from 8:00 AM until time of services. A Rosary will be prayed on Sunday, November 29, 2020 at 6:00 PM in Martin & Castille Funeral Home. Reverend Mark Derise, Pastor of Sts. Peter and Paul Catholic Church in Scott, will conduct the funeral services. Survivors include his loving wife of 55 years Louella Savoy; his daughters, Karen Molbert and her husband Harold; Jeannie Hoppe and her husband Steven; and Donna Richard; seven grandchildren (all of whom he was very proud of) : Beth A. Molbert, Miranda M. Hoppe, Nicole K. Hoppe, Brandon J. Hoppe, Hannah E. Credeur, Deacon Connor P. Poirrier, Samuel S. Poirrier, and one great-grandchild, Liam Credeur. He was preceded in death by his parents, Cleodore and Nora Hebert Savoy, his brother Robert Savoy and his sister Velma Broussard. Gerald was born November 4, 1942 in Youngsville, LA. He attended Youngsville High School. On June 19, 1965 he was united in marriage to Louella Guidry and became a life-long resident of Scott, LA. He was employed with Montgomery Ward for over 30 years. He was a proud member of the Knights of Columbus and was a Past Grand Knight with the Duson chapter. Mr. Gerald was a member of the Knights of Columbus, Scott chapter and served as an usher for Saints Peter & Paul Catholic Church. His most cherished time was fishing with his wife and Sunday get-togethers with the family. He was fun-loving and had a great sense of humor. He will be remembered as a simple man with a big heart. Pallbearers will be Ronnie Savoy, Tammy Guidry, Harold Molbert, Steven Hoppe, Samuel Poirrier and Brandon Hoppe. Honorary Pallbearers will be Ray Savoy and Mark Howard. Memorial contributions can be made in Mr. Savoy's name to Hospice of Acadiana www.hospiceacadiana.com and/or Sts. Peter & Paul Catholic School Multipurpose Facility Fund, 1301 Old Spanish Trail, Scott, La. 70583. A heartfelt appreciation is extended by the Savoy family to the nurses, staff and doctors of Hospice of Acadiana for their kindness, compassion and loving care given to Mr. Savoy and his family during their time of need. Also, a very special thanks to Dr. Michael Cain and his staff at Cancer Center of Acadiana at LGMC. View the obituary and guestbook online at www.mourning.com Martin & Castille-SCOTT-802 Alfred St., Scott, LA 70583, 337-234-2320

A Mass of Christian Burial will be held for Mr. Gerald James Savoy at 10:00 AM on Monday, November 30, 2020 at Sts. Peter & Paul Catholic Church in Scott. Mr. Gerald was 78 when he passed away on Friday, November 27, 2020 at his residence in... View Obituary & Service Information

The family of Gerald James Savoy created this Life Tributes page to make it easy to share your memories.

A Mass of Christian Burial will be held for Mr. Gerald James...

Send flowers to the Savoy family.