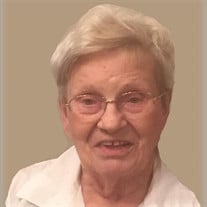 Funeral services will be held on Wednesday, February 17, 2021 at 1:00 PM in La Chapelle de Martin & Castille in Lafayette for Geraldine "Gerrie" Tinsley Autrey, 86, known for saying "You are NEVER supposed to tell people your age". Gerrie passed away peacefully on Thursday, February 11, 2021 at her son Mickey and Brenda's home in Cecilia, surrounded by her family. She is survived by two sons and their spouses, Mickey and his wife, Brenda Landry Autrey of Cecilia, and Robbie and his wife, Ann Drost Autrey of Scott; her three grandchildren who loved her dearly and their spouses, Kristy and her husband, Jason Faulk of Cecilia, Jonathan and his wife, Kristin Uransky Autrey of Eunice, and Matthew Curtis and his wife, Katelyn Smith Autrey of Scott; her four great-grandchildren, Carlee Claire Faulk, Colton Palmer Faulk, Emily Elizabeth Autrey, and Curtis David Autrey; one sister, Maxine Tinsley Holtzclaw of Simsboro; and a host of nieces and nephews. She was preceded in death by her spouse of 49 years, Curtis Palmer Autrey; her parents, Vinnie Lorene Cox Tinsley and Thomas Eugene Tinsley; her sister, Thelma Tinsley Brewster Robinson; her brothers, Edward "Kit" Tinsley and Thomas "Bud" Tinsley. Gerrie, in her early years, was a beautician by trade. After retirement from Sears, where she worked as the service department supervisor, her and her husband began their own antique business, Autrey's Past and Present, in the early 1990's. From there, she worked as the store manager for the Lafayette Antique Market for over 25 years. "March", as she was known to her grandchildren and great-grandchildren, loved spending time with her family, going to the casino, tending to her yard and restoring antique furniture. Interment will be in Lafayette Memorial Park Cemetery. Deacon Joseph Ulysses Joubert, Jr. with Our Lady of Mercy Catholic Church in Opelousas will conduct the funeral service. Pallbearers will be Jason Faulk, Jonathan Autrey, Matthew Autrey, Colton Faulk, Derrick Robin, and Sass, her beloved yardman and friend. Honorary Pallbearer will be Curtis David Autrey. The family requests that visitation be observed in Martin & Castille's DOWNTOWN location on Wednesday from 9:00 AM until time of service. A heartfelt appreciation is extended by the Autrey family to her caregiver, Lunikia "Nikki" Edmond, who so tirelessly showed her love, affection and care. We are forever grateful. View the obituary and guestbook online at www.mourning.com Martin & Castille-DOWNTOWN-330 St. Landry St., Lafayette, LA 70506, 337-234-2311

The family of Geraldine "Gerrie" Tinsley Autrey created this Life Tributes page to make it easy to share your memories.

Send flowers to the Autrey family.