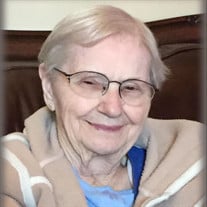 Funeral services will be held on Tuesday, October 13, 2020 at 1:00 PM in La Chapelle de Martin & Castille in Lafayette, for Gladys B. Theriot, age 87, who passed away on Friday, October 09, 2020 at Courtyard Manor Retirement and Assisted Living... View Obituary & Service Information

The family of Gladys B. Theriot created this Life Tributes page to make it easy to share your memories.

Send flowers to the Theriot family.