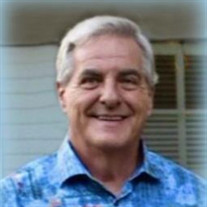 A Mass of Christian Burial will be held on Saturday, September 4, 2021 at 11:00 AM in Sts. Peter & Paul Catholic Church in Scott for Glenn Paul Landry, age 62, who passed away on Saturday, August 28, 2021 at Our Lady of Lourdes Regional Medical Center in Lafayette. The family requests that visitation be observed in Martin & Castille's SCOTT location on Friday from 4:00 PM to 9:00 PM and will continue on Saturday from 8:00 AM until time of services. A Rosary will be prayed on Friday at 7:00 PM in the funeral home. Entombment will be in Fountain Memorial Gardens Mausoleum. Reverend Gil Dutel will conduct the funeral services. Survivors include his beloved wife of 27 years, Cindy McDaniel Landry; his son, Jacob Landry; his daughter, Anna Landry; his siblings, Keith Landry and wife Janna, Curt Landry and wife Dawna, Marc Landry and wife Theresa, Scotty Landry and wife Shawntel, Yvette Camet and husband Oran III (Trey); and sister-in-law, Annette Landry; numerous nieces and nephews. Glenn was preceded in death by his parents, Harold Lee and Thelma Landry; his brother, Newton Landry; and his in-laws, Harry McDaniel, Jr. and Isabelle Premeaux McDaniel. A fun, loving spirit that touched many hearts as a servant of God is now carrying on his role of guardianship as an angel watching over his family. Glenn Landry was a proud native of Scott, Louisiana, and was the third of seven children. He was born on October 5, 1958, raised by Thelma Judice Landry and Harold Lee Landry. Growing up, Glenn’s strong work ethic originated from working in his family’s furniture store, Landry’s Furniture World. He was a graduate from Acadiana High School, class of 1976. Down the road, Glenn fell in love with Cindy Landry from Gueydan, Louisiana, and married her on May 28, 1994 in his home-town of Scott at Sts. Peter and Paul Catholic Church. Together, they have raised two beautiful children named Jacob Landry and Anna Landry. They raised their children in the Catholic faith, with Glenn being their devoted teacher and mentor. He was a Godly man whose faith was an inspiration to all who knew him. He went on to spend the last 40+ years of his life working in the oil field as a very talented instrumentation specialist. His talents and passions were endless with his creativity. He was an artist in many aspects, such as: drawing, woodworking, carpentry, commercial drafting, etc. However, his main passion was his family and building gifts for them. He would spend hours outside or in his workshop working diligently to build items to improve their home. Glenn found the utmost joy in watching his children explore their own hobbies/talents, whether it be sports for Jacob or music and art for Anna. He was in complete bliss if his family was in town, which is why he would choose to host most of the family gatherings. He would create new projects around the house, in order to make things more exciting or fun for when his siblings and family would come over. Before all, God was at the center of Glenn’s life, and his family was his axis for the world revolving around him. Pallbearers will be Keith Landry, Curt Landry, Marc Landry, Scotty Landry, Trey Camet, and Robert LeBlanc. Honorary Pallbearer will be Yvette Camet. View the obituary and guestbook online at www.mourning.com Martin & Castille-SCOTT-802 Alfred St., Scott, LA 70583, 337-234-2320

A Mass of Christian Burial will be held on Saturday, September 4, 2021 at 11:00 AM in Sts. Peter & Paul Catholic Church in Scott for Glenn Paul Landry, age 62, who passed away on Saturday, August 28, 2021 at Our Lady of Lourdes Regional Medical... View Obituary & Service Information

The family of Glenn Paul Landry created this Life Tributes page to make it easy to share your memories.

A Mass of Christian Burial will be held on Saturday, September...

Send flowers to the Landry family.