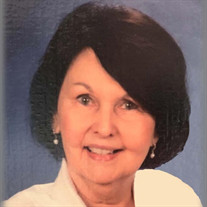 A PRIVATE Catholic Funeral Mass will be held on Monday, January 4, 2021, at 10:00 AM in St. Peter Roman Catholic Church in Carencro, for Gloria Ann Guidroz Totaro, 78, who passed away on January 1, 2021 at her residence in Carencro, with her loving family at her side. Entombment will be in St. Peter Mausoleum in Carencro. Reverend Donovan Labbe, Pastor of St. Peter's Catholic Church in Morrow, Louisiana, will conduct the funeral services. Honorary Lectors will be Rachel Totaro and Morgan Daigle. Honorary Giftbearers will be Olivia Totaro and Kaylan Walters. Musicians will be Malorie Hebert, Lauren Franks, and Michael Totaro. Survivors include her husband of 62 years, Peter Salvador Totaro, Jr.; her children, Michael Totaro and wife, Phyllis, Randy Totaro, and Kim Totaro Walters and husband, Wayne; her grandchildren, Malorie Hebert and husband, Kyle, Ian Walters and wife, Kaylan, Nicholas Totaro and wife, Rachel, Everett Franks, Olivia Totaro and fiance, Lee Duhon, and Lauren Franks; and six great-grandchildren, Dominic, Ayden, Gabriel, Nathan, Vincent, and Ellie; her siblings, Kenneth Guidroz and Leonce "Butch" Guidroz, Jr. She was preceded in death by her parents, Bertha Zerangue Guidroz and Leonce Guidroz, Sr.; her siblings, Mildred Benoit, L.J. Guidroz, Earl Guidroz, Sr., Jimmy Guidroz, Ronald Guidroz, Jane Andrus, and Marie Cortez. A resident of Carencro, Louisiana for most of her life, Gloria was a loving and devoted wife, mother, grandmother, great-grandmother and sister. She met the love of her life, Pete, when she was just 16 years old. It was love at first sight and they married in 1958 at Sacred Heart Catholic Church in Port Barre, Louisiana. Gloria and Pete bought their first home in New Orleans, Louisiana where they lived from 1958 to 1974. Later, they relocated to Carencro where they remained. Gloria worked for American Bank (later Whitney Bank) for 17 years and was promoted to a Branch Manager. She was a devout Catholic and was a member of the choir and St. Anne's Society at St. Peter's Roman Catholic Church in Carencro. Gloria was a loving, patient and kind person. Many would call her a "Saint". Above all, she loved God and her family. She raised her children to love God as well and to cherish time spent with family. Pallbearers will be Nicholas Totaro, Lee Duhon, Kyle Hebert, Everett Franks, Ian Walters and Euric Meche. In lieu of flowers, memorial contributions can be made in Gloria's name to Louisiana Hospice and Palliative Care, 426 Heather Drive, Opelousas, LA 70570. A heartfelt appreciation is extended by the Totaro family to her caregivers, Joann Castania and Donell Cook Totaro for their selfless care and dedication to Gloria. The family would also like to thank the staff of Louisiana Hospice and Palliative Care, especially, Dr. Fernando Alemany, Belinda Poor and Tonya Romero for their compassion and attentiveness during Gloria's final days. We want to personally thank Rev. Mark Ledoux, Pastor of St. Peter Roman Catholic Church for administering the Sacrament of Anointing of the Sick and Viaticum (final Holy Communion). View the obituary and guestbook online at www.mourning.com Martin & Castille-DOWNTOWN-330 St. Landry St., Lafayette, LA 70506, 337-234-2311

A PRIVATE Catholic Funeral Mass will be held on Monday, January 4, 2021, at 10:00 AM in St. Peter Roman Catholic Church in Carencro, for Gloria Ann Guidroz Totaro, 78, who passed away on January 1, 2021 at her residence in Carencro, with her... View Obituary & Service Information

The family of Gloria Ann Guidroz Totaro created this Life Tributes page to make it easy to share your memories.

A PRIVATE Catholic Funeral Mass will be held on Monday, January...

Send flowers to the Totaro family.